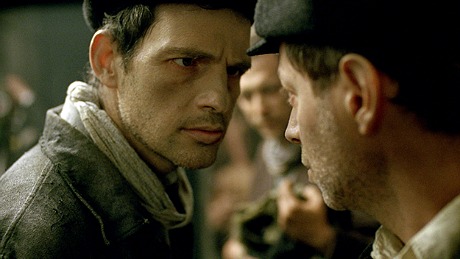 McCarthy: “The one film that I would speak for that just knocked me out way more than any other was Son of Saul.”

McCarthy: “I think it’s an extraordinary film, one of the most amazing opening shots I’ve ever seen that completely establishes the perspective from which you’re going to experience these events, which, in a way, I think is the most appropriate and convincing way of showing Holocaust-related material I’ve ever seen in any fiction film. In other words, the perspective—you know what’s going on outside the frame or out of focus in the back of the frame, the character doesn’t want to see it, doesn’t want to think about it, you don’t actually see everything that’s happening but you know what’s happening. And I think that was sustained in an extraordinary way all through the film. It’s the one film that just stays in my mind in a way that I could say it was worth coming here to see. I felt like everything else that I’ve liked — Mad Max, Carol and Inside Out — you know, they’ve already opened or they’re going to open very soon, and somehow the sense of discovery at Cannes hasn’t been there for me this year, the one exception being Saul.”

Smith: “Whether you like it or hate it, that’s definitely the big discovery and flashpoint of the festival, at least so far.”

Romney: “It’s quite brilliant, because formally and thematically, it completely rethinks the Holocaust film and the whole question of whether you can represent the Holocaust, whether you should represent it, the question there being a taboo and if you stage these horrific events, whether you can show them at all or not. So it’s extraordinary to think about all of these things going on, apparently being reconstructed very realistically and panoramically, but they’re all out of shot or they’re obscured by the protagonist’s head. And as you said, it also becomes a kind of metaphor for his situation because he’s someone who’s completely innocuous. And it radically de-sentimentalizes the Holocaust, because one of the ideas that we always hold onto about the Holocaust which is very sort of reassuring, is the idea that among the victims there was some sort of solidarity and people were able to reach out to each other emotionally, and this suggests that the horror and the oppression was so complete that even that became impossible and is now isolating people, making victims into sonderkommando executioners and then making executioners back into victims. And it’s just a genuinely horrific and, I think, very, very lucid, rigorous rethinking of what it means to think about the Holocaust cinematically.”

Grisseman: “I agree that it is a virtuoso film in a way—it’s a knockout. But I think that’s already part of the problem for me, because I think the Holocaust doesn’t need a knockout director but a responsible director. I think that Son of Saul is a very smart-ass film in a way, because he’s on top of the discussion, he even makes the Lanzmann argument of focusing on the Jews that rebel and revolt and not on the Jews that let themselves be slaughtered. And the thing that he incorporates, the true story of the photographs being done within the camps, the four photographs that remain…there’s one being taken in the film…shows that he has something to say about the making of images and the question of should we make images of this. But nevertheless I think the whole enterprise of doing a film like this, in such a knockout form, is in itself highly problematic and also obscene, I think. Just thinking about staging such a thing, just thinking about laying 20 nude dead women on top of each other and then let one be dragged across the floor with her legs open…I think that’s highly obscene and it doesn’t give me any clearer or more enlightening picture of what happened.”

Grosoli: “But the knockout aspect of the film is on the margins. The film is about an obsession, which is precisely why it manages to avoid sentimentality: obsession and sentimentality are mutually exclusive, something obsessive is by definition ‘unsentimental’ and we are 100 percent on the side of the obsessive main character here.”

Wells exception: I 100% understood the main character’s need to give a proper burial to the dead boy, but what he was trying to do was almost certainly suicidal so I wasn’t 100% with him. I felt for him, empathized with his insisting upon somehow carrying out a ritual of love and dignity in this horrific environment, but I was more “with” the guys saying to him “what the motherfuck is wrong with you?….do you want to be dead?”

May 22, 2015by Jeffrey Wells4 Comments
« Previous post
“Wonderful To Have You Back In The Neighborhood”
Next post »
Son of McQueen-Styled Scooter Rapture