Yesterday afternoon famed mathematician and Nobel Prize winner John Forbes Nash, 86, and his wife Alicia, 82, had just returned from Norway and were riding in a cab on the New Jersey Turnpike their way to back to their Princeton home. A familiar situation, perhaps one that led to daydreams as Nash gazed at the mid-afternoon highway traffic, but then a wild card hit the table and in a flash, Nash and his wife were dead, “killed” in a sense by 46 year-old cab driver Tarek Giris, who apparently made some kind of judgment error in trying to pass a car and wound up slamming into a guard rail with the Nashes getting thrown from the cab. 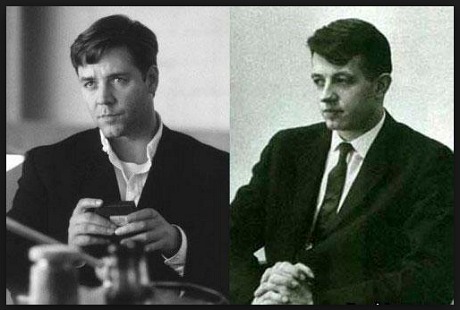 It’s conceivable that 14 years ago Girgis, then 32 or 33, saw Ron Howard‘s A Beautiful Mind, the 2001 film that was inspired by Nash’s life, and in which Russell Crowe played Nash and Jennifer Connelly played Alicia. And if he did it’s entirely possible that Girgis was moved by it, perhaps profoundly. Or perhaps he felt special stirrings from James Horner’s score (as I did) or the third-act “pens” scene or whatever. The fact that many were touched by A Beautiful Mind is why it overcame the dissenters and quibblers and won the Best Picture Oscar. I knew from the get-go that it wasn’t about the full Nash equation, of course, and that certain aspects of his life had been omitted, but I always felt a curious kinship, rooted in dreams and that music and that look of childlike sadness in Crowe’s eyes and that spazzy hand gesture he used to suggest the flight of thought.

Random fate is unforeseeable before it happens, of course, and the how and why are never clear, but any way you slice it (and Nash certainly knew this as well as anyone if not more so, given his familiarity with mathematics and probability and cosmic chance) death comes whether you’re ready or not. Nothing is assured, everything is in flux, the plug could be pulled at any minute and for any reason. Regrets and condolences to everyone who knew the Nashes, and to the filmmakers and actors who helped make A Beautiful Mind…suddenly.