Max Rolls Into Cannes, Shooting Flames Over The Sea

I’ve more or less said it already: George Miller‘s Mad Max: Fury Road (Warner Bros., 5.15) is one of the finest action films ever made — phenomenal, triple-A, pulse-pounding, perfectly performed by a live-wire cast topped by Tom Hardy and Charlize Theron, occasionally hilarious and superbly cut, timed, captured and choreographed…a grand slam if there ever was one for this type of thing. And what would that be? Call it an apocalyptic chase thriller with heart and humanity (underneath the rubber and fire and flying bodies it’s about wounded characters rediscovering their compassion and trust). And it’s extra special, I feel, because of the respect and allegiance it shows for women as leaders, fighters, nurturers, survivors. Without taking anything away from Hardy, who brings the legendary Max Rockatansky to life just as winningly as young Mel Gibson did 30-plus years ago, Fury Road is very much a woman’s action film, and all the richer for that.

I saw this epochal film for the second time this morning and was studying Miller’s schemes (visual, structural, thematic) all the more closely this time. It’s just brilliant, dawg — almost too much to fully appreciate in a single setting.

A few weeks ago the deranged Vin Diesel declared that Furious 7 is Best Picture material; Fury Road actually is that. Fury Road so puts Furious 7 to shame that if director James Wan is any kind of man he’ll collapse in sobs after seeing it and do the usual-usual (put on a fishing hat and dark shades, drive out to Palm Springs and register in a nondescript hotel under a fake name for the next three or four weeks). Miller has probably forgotten more than Wan knows about how to make a great action film.

And yet a fair-sized portion of those who worshipped Furious 7 are reportedly hesitant or undecided about seeing Fury Road. You can lead a horse to water…

This is one of the most visually striking action flicks I’ve ever seen. Each and every shot is exquisitely balanced and radiantly artful in a way that Vittorio Storaro will probably appreciate more than most, as Fury Road uses a deliciously robust (some would say intense) color scheme. Many of the all-desert, all-the-time images (particularly the nocturnally-tinted blues) reminded me of Storaro’s work on The Sheltering Sky (’90). The great John Seale definitely earns consideration for a Best Cinematography Oscar. Each and every shot has been painted by a master. 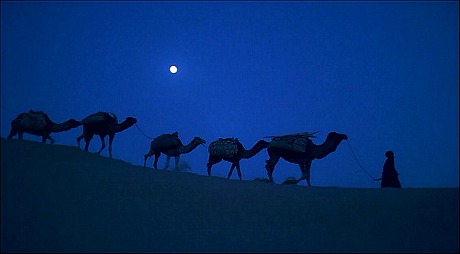 Image from Bernardo Bertolucci and Vittorio Storaro’s The Sheltering Sky (’90). 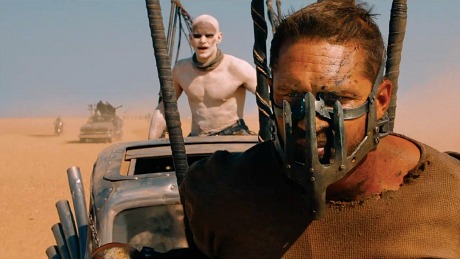 Mad Max: Fury Road is a fully satisfying thing in almost every respect. I adore the way it invests in women characters of all ages, particularly during the last third, and I think the guys who’ve complained about the film not being manly or studly enough are full of it. And I admire the way it very carefully delivers a theme that’s about putting aside animal instincts and letting our better, more trusting selves take charge. But I would be derelict if I didn’t acknowledge there are two problems.

One, I think it was a slight mistake to make Tom Hardy‘s Max wear an iron face plate for the first 45 minutes. I’m not exaggerating — I timed it this morning and he’s The Man in the Iron Mask for precisely that long, and for nearly half that time he’s a human hood ornament. You don’t go to movies like this to see the cool-ass hero in chains for quite that long. 15 or 20 minutes, okay, but not 45. And two, I don’t think the film really cuts loose with all the cylinders pumping and all suspicions laid to rest among the good guys until the 45-minute mark. Some critics I’ve spoken to said they felt a certain fatigue during the last half-hour, but I didn’t — the final chase sequence is as masterful as this sort of things gets.

Special salute to the score by Tom Holkenburg (a.k.a. Junkie XL)…those bass violas!

As I said yesterday, Mad Max: Fury Road is driven by old-school technique every step of the way, and is a spatial-relationships actioner par excellence. If I had my druthers I’d have preferred a bit more downtime for the character moments. These moments happen, mind, and not insufficiently but almost in the manner of oil-change pit stops. I don’t have a problem with what Fury Road is. At all. I hope I’ve made that clear. It’s extremely well done, and in most respects masterful. I just wish it was a little more character-driven in the realm of The Road Warrior.

I understand that Miller obviously made the movie he had to make to satisfy megaplex action requirements in force today. Fury Road has twice as many cuts qs The Road Warrior, and that’s simply what had to be done. He did the job that was required.

Incidentally: I awoke at 5:30 this morning to bang this piece out before the 8:30 am showing. I’d been filing with excellent wifi until 1:30 am, but when I started this morning I realized the wifi was dead. Rebooted the computer once, the modem twice…nothing. So I strolled over to the Grand Palais and got myself a nice seat in a leg-stretching row. I’ve paid through the nose for the Palais wifi and the speed is quite excellent. Anyway, I’m glad I enjoyed a second viewing before banging this out. 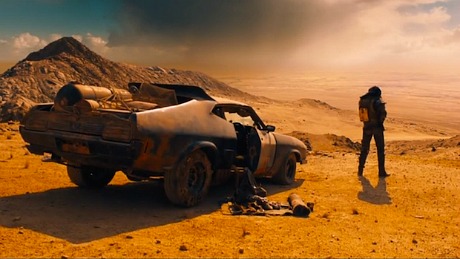