A last minute instinct guided me to an 11 am Salle Debussy screening of Ida Panahandeh‘s Nahid, a compelling if slow-moving Iranian family drama, instead of Asif Kapadia‘s two-hour Amy, which screened at the same hour at the Salle Bunuel. I don’t know if I made the “right” decision or not, but I figured I’d either catch Amy tonight at 11:30 pm or on a movie-streaming channel before long while the Iranian film might not be available for some time, Asghar Farhadi‘s long-delayed About Elly being one example. 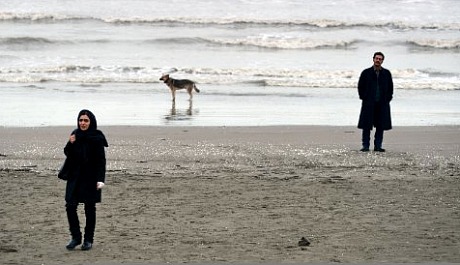 I was certainly reminded by Nahid of a frustrating reality in both a real-world and dramatic sense, which is that the cards are heavily stacked against divorced Iranian women looking to win permanent custody of their children due to strict nuptial laws that favor fathers, even if the dad in this case is an off-and-on junkie with a gambling problem. The burden is still on the mother to prove she is morally worthy of raising a child.

This plus a decision by Panahandeh and screenwriting partner Arsalan Amir to more or less snail-pace the story and make their titular lead character, movingly portrayed by Sareh Bayat, a prideful if overly secretive and too-stubborn woman, and you have a film that feels right and rooted but at the same time one that taxes your patience. Mine, at least.

Even though divorced, the financially-challenged Nahid has to tred very carefully lest she be marked as unsuitable for permanent custody of her rowdy, bordering-on-incorrigible 10 year-old son (Milad Hasan Pour), who feels much closer to his no-account dad (Navid Mohammad Zadeh) than his mom. Iran’s patriarchal system demands that she remain “loyal” to her ex by not engaging in another relationship with a man (in this instance a fair-minded, well-to-do hotel owner named Massoud, played by Pejman Bazeghi) unless within the bonds of marriage, and even then the courts are inclined to favor the father if he uses his ex-wife’s situation, which Iranian courts would regard as morally shady, to sue for custody.

Nahid gets temporarily married to Massoud (Iran’s system allows for one-month renewable marriage contracts) but she’s not open about the various pressures she’s facing. She doesn’t fully trust Massoud, suspecting on some level that he’ll enslave or take her for granted once they’re fully married even though he seems like a decent guy, and her lack of candor and unwillingness to share prompts him to wonder if their relationship will work out. I was wondering that myself. Nahid struck me as good woman of character who’s also a piece of work. She holds her cards too close to the chest and doesn’t play them very shrewdly, and with the two-hour running time and all my frustrations began to build and build.

Nahid is a solemn, believable, steady-as-she-goes drama, but it’s not on the level of Farhadi’s A Separation or The Past, and the truth is that I began looking at my watch around the one-hour mark. But Panahandeh’s instincts and skills as a director-writer are nonetheless formidable.

May 16, 2015by Jeffrey Wells4 Comments
« Previous post
Meltdown Mountain: Carol Is Easily Cannes’ Best So Far (Along With Son of Saul)
Next post »
Thanks But Don’t Ask