Support on Patreon Follow @wellshwood
17 Comments
Think It Over, Asshole
June 19, 2015 4:25 pmby Jeffrey Wells
13 Comments
You Don’t Have To Say You Love Me

The realm of Only Angels Have Wings is all-male, all the time. Feelings run quite strong (the pilots who are “good enough” love each other like brothers) but nobody lays their emotional cards on the table face-up. Particularly Cary Grant‘s Geoff, a brusque, hard-headed type who never has a match on him. He gradually falls in love with Jean Arthur but refuses to say so or even show it very much. But he does subtly reveal his feelings at the end with the help of a two-headed coin. It’s not what any woman or poet would call a profound declaration of love, but it’s as close to profound as it’s going to get in this 1939 Howard Hawks film. If Angels were remade today with Jennifer Lawrence in the Arthur role she’d probably say “to hell with it” and catch the boat, but in ’39 the coin was enough. Easily one of the greatest finales in Hollywood history.

Kris Tapley isn’t admitting this in so many words, but his sage industry-centric column, In Contention, has been cut loose at Hitfix, which has been dumbing itself down and cranking up the fanboy content in attempts to increase traffic and profitability. The owners of Hitfix have been unsuccessful in attempts to sell the site and so, a source says, they’ve been “cutting the fat” to make it as attractive as possible to buyers. I’m told that they’d come to regard Tapley’s column as too hip and upscale to appeal to the knuckle-draggers they’re now looking to focus on.

Tapley’s contract had ended and he’d allegedly stalled in re-upping for some reason. I’m told he’d met with Variety‘s Claudia Eller to discuss some kind of adoption or alliance. The Hitfix honchos told Tapley a week or two ago that they’d “decided to go in a different direction, this is what we’re doing, we’re not doing award-centric coverage any more…thanks a lot,” as a source puts it.

Insect antennae signals are telling me that Barry Levinson‘s Rock the Kasbah (Open Road, 10.27) (a) is definitely good and possibly better than that, party due to Mitch Glazer having penned the screenplay, (b) might turn out to be Bill Murray‘s best role since Lost in Translation and maybe even Rushmore and (c) a theatrical comeback for Levinson. Costarring Bruce Willis, Zooey Deschanel, Kate Hudson, Leem Lubany, Scott Caan, Danny McBride, Arian Moayed, Taylor Kinney and Beejan Land. 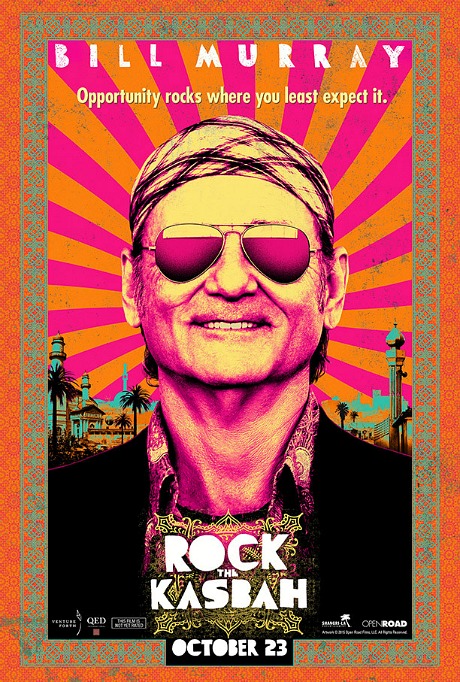 After nearly a four-day absence Zak returned this morning. Out of the effing blue. “Oh, hi…you losers didn’t miss me, did you? I was catting around, adventuring, living the life of Ernest fucking Hemingway. What’s doing on the boring-ass home front?” I was half overjoyed, half pissed. Part of me wanted to say “you fucking asshole, where were you?” but I suppressed that. We made out for a half-hour straight. My guess is that the local kidnapper saw one of my “lost cat” signs and felt guilty and let him go. That or Zak escaped. Food, whipped cream, grooming, more backrubs, neck massages, ear kisses. He’s sleeping now. All is well. 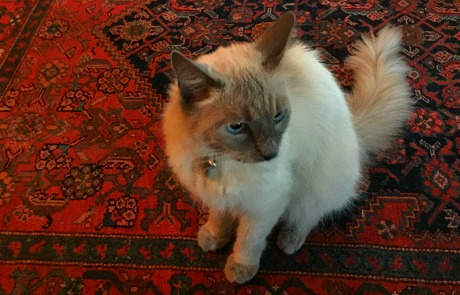 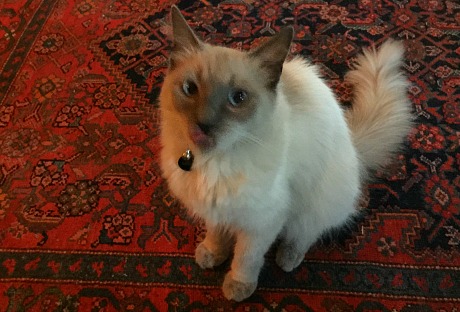 People who buy low-thread-count T-shirts at Target won’t understand but this Kooples priest-neck T-shirt, which I bought yesterday at a 50% discount at the Robertson Blvd. store, is perfect, exquisite. I tried it on and my eyes were flooded with tears. I’ve been looking for a T-shirt like this all my life, and I might possibly wear T-shirts like this for the remainder of it. Three dark-blue buttons below the neck, covered by a military-styled flap…to die for. All hail The Kooples! Seriously. 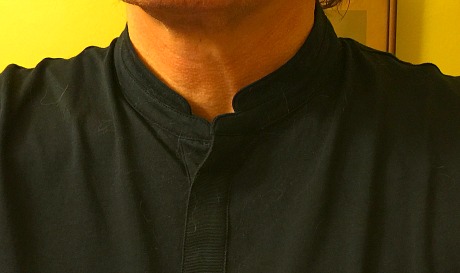 Talking Point Memo‘s Tierney Sneed is reporting that Jeb Bush has cynically dummied up when asked about the apparent motives of Charleston shooter Dylann Roof. When asked if he thought the attack was racially motivated, Bush told a Huffington Post reporter, “I don’t know.” The question came after a speech Bush made at a Faith and Freedom Coalition summit in Washington. Then came the death quote: “I don’t know what was on the mind or the heart of the man who committed these atrocious crimes, but I do know what was in the heart of the victims.” Translation: “I don’t want to risk alienating the right-wing racist yokel vote in the primaries so let’s sidestep the racial-hate stuff and concentrate on empathizing with the God-worshipping victims.” Let me explain something very clearly: Jeb Bush’s candidacy is dead in a general-election sense. Maybe not with the Republicans and Tea Party-ers but he’s finished nationally. The man is a calculating soul-less fiend. He’s just side-stepped himself into eternal infamy.

“Sicario is basically about heavily militarized, inter-agency U.S. forces hunting down and shooting it out with the Mexican drug-cartel bad guys, and at other times flying here and there in a private jet and driving around in a parade of big black SUVs and so on….zzzzzz. It’s a strong welcome-to-hell piece, I’ll give it that, but Sicario doesn’t come close to the multi-layered, piled-on impact of Steven Soderbergh‘s Traffic, portions of which dealt with more or less the same realm.

“The tale, such as it is, is told from the perspective of Emily Blunt‘s FBI field agent, who, being a 21st Century woman who’s in touch with her emotions, is of course stunned and devastated by the unrelenting carnage blah blah. You know what I’d like to see just once? A female FBI agent who isn’t in touch with her emotions, or at least one who tones it down when it comes to showing them. Too much to ask for, right?

“One of her battle-hardened colleagues, a senior veteran with a semi-casual ‘whatever works, bring it on’ attitude, is played by the ever-reliable Josh Brolin. My favorite character by far was Benicio del Toro’s Alejandro, a shadowy Mexican operative with burning eyes and his own kind of existential attitude about things. Benicio the sly serpent…the shaman with the drooping eyelids…the slurring, purring, south-of-the-border vibe guy.