A few days go Skydance honchos David Ellison and Dana Goldberg told Collider‘s Matt Goldberg that Tom Cruise will return as fucking Maverick in Top Gun 2: Danger Zone. Pic will apparently be some kind of fare-thee-well, classic-values tribute to ace fighter pilots along with an uh-oh thread about the growing dominance of killer drones, at least as far as killing Islamic fundies is concerned. Cruise will turn 53 next month, and will be 54 or 55 when the filming begins, when and if. Obviously no change in the basic plan. Cruise is committed to being the big-budget, action-flick energizer bunny until he can no longer keep it up. How much more dough does he need? What does he want that he can’t already afford? “The future, Mr. Gittes…the future.” 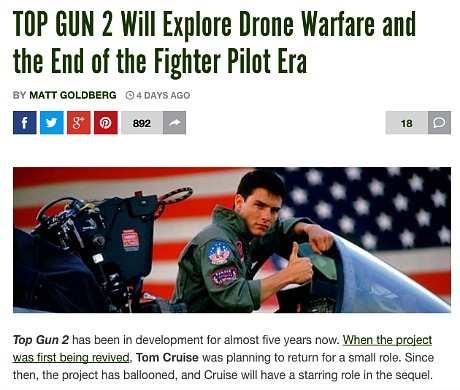