The most persistent argument against my Beware of Brownfellas piece is that (a) the 2007 Bluray version of Goodfellas was artificially brightened and (b) the new Goodfellas Bluray is a truer, more film-like rendering of what the original answer print looked like — i.e., nice and dark and murky. My response is simple. The 2007 Bluray version, which I’m completely happy with, contains a good amount of shade, shadows and darkness where appropriate. I saw Goodfellas three times in theatres in 1990, and I’m telling you that the ’07 Bluray is by no means an artificially brightened thing. It looks gritty, unaffected, like reality. How in the name of God can it improve the experience of watching Goodfellas by darkening and brown-tinting the image? How is it better for the viewer to remove details that were visible on the 2007 Bluray and bury them in shadows? 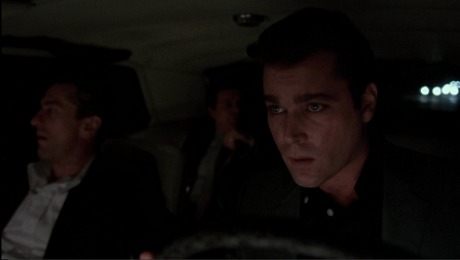 This morning I asked restoration guru Robert Harris about the why and wherefores, and his response was that the 2007 Bluray is “totally irrelevant.” What matters is the Scorsese-approved answer print that was supplied for the 2015 Bluray transfer. The 2007 Bluray, he says, “didn’t have stable reds, didn’t have proper black levels, didn’t have proper shadow detail.” The guys who mastered it, he says, “were using a more primitive technology.” And yet 2007 was ironically the first year “in which we had the ability to recreate film on Bluray.” It just wasn’t part of the ’07 Goodfellas. So, boiled down, the new Bluray is a welcome thing because it’s giving us a version that really looks like film, or so Harris and his brethren are saying.

The problem, for me, is that the new Goodfellas looks muddy, under-lighted and covered in tanning spray mixed with light brown caramel sauce.

Wells to Martin Scorsese (from a letter sent this afternoon to Thelma Schoonmaker): “You and Marty are in the middle of cutting Silence, I realize, but I went into a state of complete shock a few days ago when I looked at the new 25th anniversary Bluray of Goodfellas, which I’m calling Brownfellas.

“The bottom line is that Marty, who reportedly approved the answer print that the new Bluray is based upon, okayed a version of Goodfellas that is incontestably darker and browner — viewers are now absolutely unable to see as much detail in this new version as they could with the 2007 Bluray.

“My question to Marty is this: Why darken it? How is your masterpiece improved by removing detail that’s been visible for the last eight years on the 2007 Bluray?” 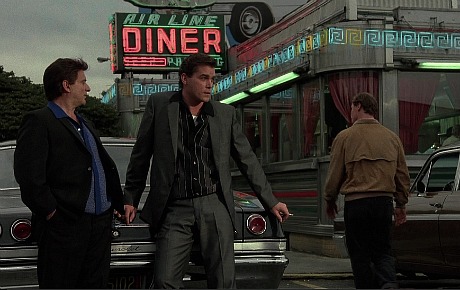 June 9, 2015by Jeffrey Wells18 Comments
« Previous post
A Film And A Performance That Won’t Be Denied
Next post »
Nancy Wells Whom I Loved