Ghost of Electricity Howls In The Bones Of His Face

Last Tuesday morning I said I didn’t want to sweat out writing a “review” for Entourage (Warner Bros., 6.3) because the filmmakers obviously didn’t give that much of a shit themselves. I still feel that way. You could call Entourage harmless but I happen to feel that anything this lazy and diddly and delighted with material abundance and bouncy boobs is, in a certain sense, kind of harmful. Certainly draining. But here’s something I didn’t mention before. The centerpiece, central MacGuffin and primary plot driver of the film is Hyde, an urban, vaguely supernatural spin on Dr. Jekyll and Mr. Hyde — directed by and starring Vincent Chase (Adrien Grenier) and financed by studio chief Ari Gold (Jeremy Piven) to the tune of $100 million. The wrinkle is that Vincent has gone over-budget and needs an extra $15 million to fulfill his vision. This means Ari has to fly to Texas and beg for the extra dough from billionaire Billy Bob Thornton, which I don’t want to talk about. The point is that with all this pressure Vince won’t show Hyde to Ari until it’s “perfect.” 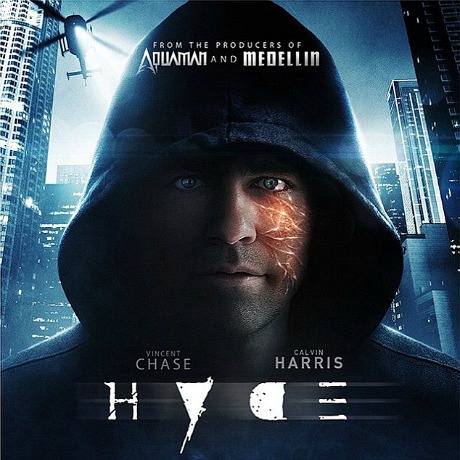 It’s one thing to hide a surprise birthday from a friend, but a film that will kill the friend’s career if it’s not a success? And what studio head is stupid enough to agree to a blind deal like this? Ari may be a Type-A shark but he’s no fool, and he knows that failure and miscalculation can happen to any director at any time, and particularly to a first-timer like Vince. An expensive studio flick like Hyde couldn’t happen under these circumstances. Ask LexG. Ask anyone with the slightest awareness of how things work in this town.

This in itself is enough to disengage from Entourage, but then we’re shown teaser footage from Hyde, which turns out to be something in the vein of Kathryn Bigelow‘s Strange Days with Vince as a kind of spooky alien DJ in a hoodie. Hyde might become a commercial hit but it’s obviously not an awards contender (the presence of a heavily armed urban SWAT team in the first 30 seconds of the teaser is proof of that), and yet Ari describes it as such after he finally sees Vince’s cut on a DVD screener. This indicates Ari has either lost his mind or has become terminally self-deluding, but the film insists otherwise. By the finale Hyde has grossed $450 million worldwide, snagged five Golden Globe nominations, and Kevin Dillon‘s “Drama” has won for Best Supporting Actor. And winged pigs flutter out of my ass like swallows coming home to Capistrano. Bullshit piled this high forces you to cut bait and just sit there and go “okay, another 40 minutes to go…all right, 30…only 20 minutes left!” and so on.