Guys Who Made Bastards

I saw A.D. Freese, Andrew Perez and Dillon Porter‘s Bastards y Diablos late Monday night after returning from my mother’s funeral back east. It’s about Ed and Dion (Andrew Perez, Dillon Porter), American-raised half-brothers in their late 20s, visiting Columbia to carry out the wishes of their recently-passed dad to scatter his ashes and connect with their roots and maybe absorb a thing or two….who knows? At first you’re thinking “uh-oh, a movie about a series of episodes but with no arc or climax,” but then you begin to realize that it’s doing all the things that good movies do, but in its own nativist, loose-shoe way. It gets there. 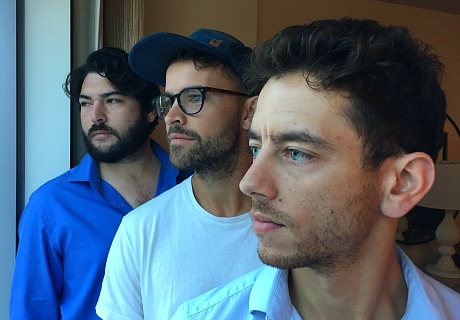 I did a sitdown interview late yesterday morning with Peres, Freese, Porter (who also produced) and costars Constanza Marek Otto and Bruni Otto. Here’s the mp3.

Having just scattered my mom’s ashes, I was definitely in a Bastards frame of mind. But it struck me as more than just amiable or familial or atmospheric or immersive. Add it all up and you’re left with what feels like a soul, which I would simultaneously define as a certain kind of believable moisture and fragrance and mood mist. I found it authentic (Perez’s script is based on an actual real-life adventure) and engaging. Apart from Freese’s Terrence Malick-influenced direction, much of the credit for the languid, aromatic vibe goes to dp Peter Grigsby.

Bastards y Diablos reminded me, in fact, of Walter Salles‘ The Motorcycle Diaries, another South American journey-of-cultural-discovery movie. The difference is that while Salles told the story of the dawning of Che Guevara‘s social conscience, Bastards y Diablos is about (a) a couple of guys getting acquainted with Colombia by wading into their father’s history and (b) the filmmakers informing audiences that there’s a lot more to Colombia than the cliches linked to the crime heyday of the ’80s and ’90s — cocaine cowboys, A Clear and Present Danger, gangland killings, the late Pablo Escobar, getting your hands chopped off with a machete, etc.

It’s also an impressive indie for the fact that it was basically made by six guys on a small budget with a Canon 5D Mark III (or something in that 5D family).

Bastards has a meditative young-guy vibe. Altogether I would call it better than decent, better than “okay.” Refreshing is a fair word to use. It’s about the kind of meditative adventure we all need to experience every year or two just to soothe our souls and keep our heads straight. 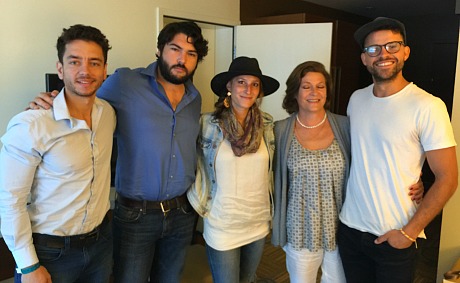 Freeze/Perez insert a few flashbacks to the father’s youthful past. The standout is a drinking contest in which the passed-out loser gets pissed on. Terrific! I was taken by a rant scene in which an emotionally unsettled cousin talks about the cliches associated with Colombia. The only thing I didn’t like was dad’s voiceover stuff — too sentimental, too much of a poetic aspirational feeling.

Bastards y Diablos feels spontaneous, lived in. The guys drink a bit, meet cute girls, drink some more, meet their father’s ex-intimates and family members. They visit Medellin, Cartagena, Santa Marta, Cali and other old-worldish, nicely-lighted locales. They toss their father’s ashes into the air and they actually float away…unlike Donny’s ashes in The Big Lebowski. When the film began I was thinking of Tony Montana‘s “I hate fawking Colombians” line; by the last third I was thinking I might actually want to visit Colombia. Maybe buzz around on a scooter. I don’t want to do any cocaine but I’d like to chew those coca leaves.