“I have to do it. You rape our women and you’re taking over our country. And you have to go.” — statement attributed to Dylann Storm Roof, 21, identified as the murderer of nine worshippers at Charleston’s Emanuel African Methodist Episcopal Church last night. 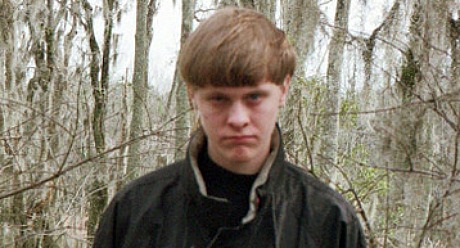 Standard racist hate stuff. Straight out of Alan Parker‘s Mississippi Burning with a 21st Century refresh. Tea Party spokespersons will arch their backs and deny it to Kingdom Come, of course, but an aggrieved fear of multiculturalism is where a significant portion of their flock are coming from. Ignorance and malice are generally passed-on qualities and not manifested out of whole cloth. And they are always helped along by those twin bugaboos of the American yahoo class — an insufficient brain-cell count along with a lack of education.

Roof was a legal adult, but those who sired and raised him are obliged to answer questions today and for the rest of their lives. Cue the friends, former classmates and next-door neighbors who always found Roof to be a quiet, polite, low-key guy who kept to himself.

Update: Roof has been captured in Shelby, N.C. It’s been revealed in the press conference that Roof hails from Lexington, South Carolina.

The N.Y. Times is reporting that Sylvia Johnson, a cousin of the late Rev. Clementa Pinckney, a Democratic state senator in South Carolina who was among those killed, “told NBC News that she had spoken with a survivor of the shooting who told her the gunman reloaded five times. The survivor, she said, told her that the gunman had entered the church and asked for the pastor. Then he sat next to Mr. Pinckney during the Bible study before opening fire.”

Roof apparently walked into the Emanuel African Methodist Episcopal Church, a police department spokesperson said, and attended a prayer meeting for about an hour before opening fire. Initial police reports said he entered the church about 9 p.m. and began shooting.

June 18, 2015by Jeffrey Wells26 Comments
« Previous post
“A Bad Movie About Why Movies Are So Bad”
Next post »
“I Saw Mommy Kissing Santa Claus”