Perfect Night, All Was Right

I attended last night’s Brian Wilson concert at L.A.’s Greek theatre, courtesy of the Love & Mercy team at Roadside. I went with mixed expectations. One, I’d seen Wilson and his backup band give a pleasant but not-exactly-knockout show at a UCLA venue about nine or ten years ago, and who knew if this show would be as good? It might be worse. And two, I’d been told by a friend that a typical Wilson audience these days is wall-to-wall oldsters — baldies, pot bellies, white hair, neck wattles, tent-like Hawaiian shirts — and the thought of being part of such a throng depressed me to no end. I loved the drive up to the Greek (the weather was warm and dry and the various fragrances in the air were to die for) but as I approached the main entrance I was asking myself, “Do I really want to be here?” 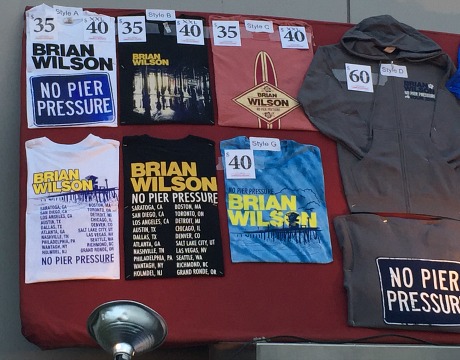 Well, my fears were unfounded. The crowd was definitely younger than expected (a healthy blend of people of all ages) and the show was far and away the best Beach Boys/Brian Wilson concert I’ve ever been lucky enough to savor. Paul Merten‘s tight ten-piece band (eleven counting Wilson) just knocked the shit out of 32 Wilson songs, and I’m sorry but it felt truly joyful start to finish. Nobody was cutting the band any slack — they were delivering like champs, gloriously smooth and clean and confident.

About three or four songs into the show I turned to Madelyn Hammond (there with Pete) on my right and said, “Wow, the band is really good!” She agreed 100%. Two seconds later a bewigged Paul Giamatti leaned over and said to me, “What? What did you say to Madelyn?” I looked at him and said, “It’s none of your fucking business!” I’m kidding — Giamatti wasn’t there.

Don’t listen to the sound of the shitty YouTube video that I’ve posted of Wilson & Co. performing “Surf’s Up” — it sounded 18 times better than what you’re hearing. They also performed a song off Wilson’s No Pier Pressure album called “Runaway Dancer” that sounded…well, at the very least catchy.

And Wilson…God, what a metaphor. And what an L.A. moment! It’s not just the timeless songs or the way he barely sings and plays like he used to (his voice is pretty much shot, he can’t sing falsetto any more, he needs a teleprompter to remember the lyrics to his own songs and he walks on-stage like an 85 year-old) but the sound of celebration and worship, the all of it, the heavenly soar of it…like water cascading out of a fountain and then showering an L.A. crowd that couldn’t have been happier or more blissfully in synch…it was like listening to Mozart perform in Vienna under a blanket of stars with a faint breeze blowing. I could go on and on.

The angel-falsetto portions that Wilson can no longer sing were covered by Matt Jardine (yes, the son of Beach Boys member and rhythm guitarist Al Jardine, who was there front and center). Matt and Wilson sometimes alternated or traded off, and it all flowed together perfectly. Former Beach Boys member Blondie Chaplin came on for a few tunes and definitely delivered one of the concert’s high points with a knockout rendition of “Sail On, Sailor.”

Is Wilson the weakest performing link in the band? Okay, yeah, he is…and so what? He’s the maestro and nobody’s complaining at all. He contributes as best he can, and the fact that you’re watching a guy who’s still banging it like a pro (his 73rd birthday happened yesterday and of course the crowd sang the classic anthem), and a guy who’s lived through various degrees of psychological anguish for the better part of two decades (more?) and here he is on-stage, alive and well and clearly happy — you could tell that even from row L — just lifts you up and makes you feel the alpha.

I realize it’s wildly out-of-character for me to say something like this but I had a truly nice time, on top of which I really loved driving home through the traffic on the bike, weaving in and out of clogged lanes on Los Feliz Blvd. and Franklin Ave. and bypassing the slowpokes and generally not getting stuck in the snarl.

“Here I am in Los Angeles on a warm summer night,” I said to myself, “and I’m being reminded that under the right circumstances and with the right kind of vibes, life can feel awfully good at times.” Don’t worry. I can feel the happiness starting to ebb as I speak. The grumpy is taking hold again…comfort! 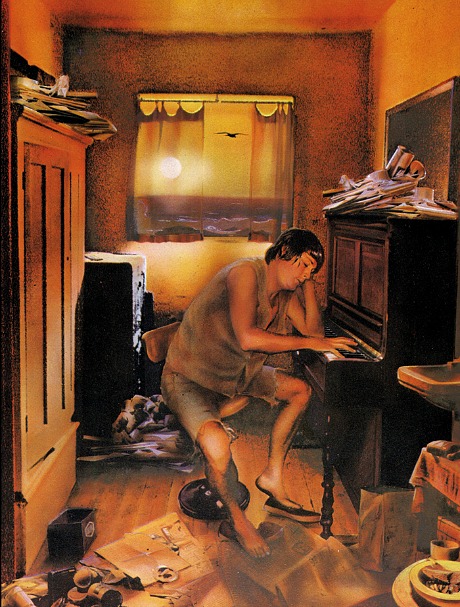 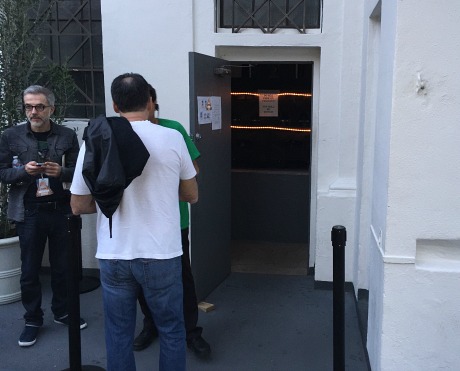 Entrance to the Greek’s hospitality room, otherwise known as the “hostility room.” Elites are invited inside to mingle with talent before the show starts. 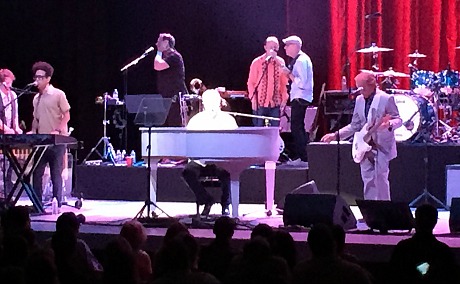