Truth Has To Stand Up To Carol

Consult link story before reading: Are you ready for the ultimate Weinstein Co. vs. Sony Picture Classics award-season showdown? A Cate Blanchett-in-Truth vs. Cate Blanchett-in-Carol Best Actress duel that will most likely put Harvey Weinstein in an eyeball-to-eyeball situation with SPC’s Michael Barker and Tom Bernard? Because it seems all but inevitable at this stage unless, you know, somebody blinks. 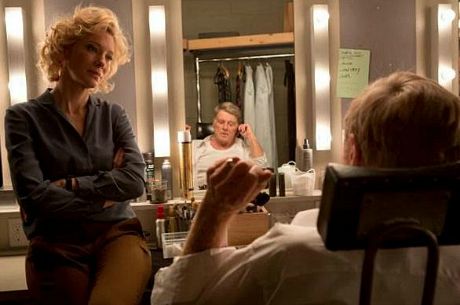 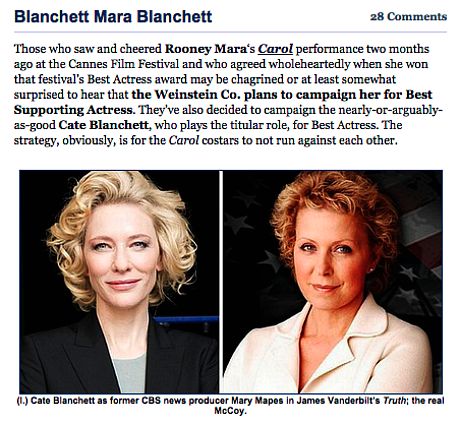 Todd Haynes‘ Carol (Weinstein Co., 11.20) was one of the biggest hits of last May’s Cannes Film Festival, and right away the buzz was that Blanchett’s performance as the titular character was a slamdunk Best Actress contender, even though many (myself included) felt that Rooney Mara‘s performance as Blanchett’s younger lover was just as penetrating. The Cannes Jury voiced their agreement when they gave Mara their Best Actress prize.

SPC announced today that Truth will be going up against Carol in an award-season sense, or rather that Blanchett will go up against herself. They formalized this situation with an announcement that James Vanderbilt‘s Truth, a presumed award-season contender about “Rathergate” starring Cate Blanchett and Robert Redford, on 10.16. Except it’s been more or less common knowledge for some time that they’d be releasing the Insider-like journalism drama sometime in the fall.

Blanchett portrays former CBS news producer and author Mary Mapes in this dramatization of Mapes’ 2005 memoir “Truth and Duty: The Press, the President, and the Privilege of Power.” Pic will dramatize the saga of how and why Mapes and CBS anchor Dan Rather (played by Redford) lost their jobs in the wake of a 2004 60 Minutes report about a young George Bush having allegedly received preferential treatment in an attempt to duck military service in Vietnam.

So Truth is coming out two and half months from now and, I’m guessing, probably destined to debut five weeks hence at the Telluride Film Festival (9.4 thru 9.7)…right? How could Sony Classics bypass that opportunity given their longstanding ties with Telluride plus the attention already commanded by Carol, which the Weinstein Co. will be pushing heavily during the fall, including a presumably vigorous campaign for Blanchett as Best Actress?

In a phrase, Truth has to stand up to Carol or perish. Because the word all along has been that Blanchett is just as commanding and perhaps award-worthy in Truth. A while back a non-vested marketing friend told me that Blanchett’s performance as Mapes is “incredible.” There can be no half-measures here. SPC has to go mano e mano against Harvey on the Blanchett front…or face award-season humiliation.

And by the way where’s the poster? Telluride is just around the corner and the film is ten weeks from opening commercially and they don’t even have a one-sheet?

July 31, 2015by Jeffrey Wells16 Comments
« Previous post
Seven Months of Festival Glory
Next post »
The Agony and the Banality