Kenny To Ponsoldt, Segel, End of the Tour: “How Do I Despise Thee For Misportraying My Late Bro? Let Me Count The Ways”

It’s been well telegraphed that Glenn Kenny, who edited and was on good bromancey terms with the late David Foster Wallace, is less than pleased with the latter’s portrayal in James Ponsoldt‘s The End of the Tour (A24, 1.31). He’s particularly unhappy with Jason Segel‘s hulking behemoth impersonation along with David Margulies‘ script, which is based on David Lipsky‘s “Although of Course You End Up Becoming Yourself.” Kenny has now vented his complaints in detail in a 7.29 Guardian piece. 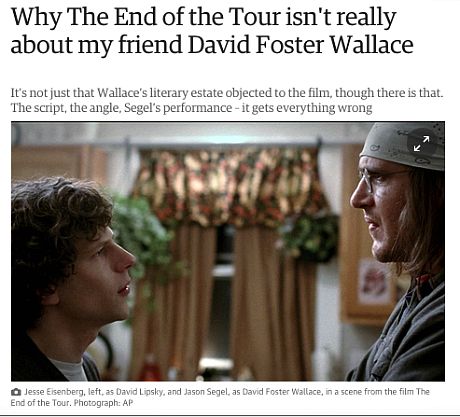 What do they boil down to? Wallace was who he was and the guy presented by Ponsoldt, Segel and Margulies is a lot lumpier and gloomier and kind of suicide-obsessed with his clothing a half-size too small.

Kenny obviously knows what he knows but honestly? I found myself wondering if the ghost of Abraham Lincoln had similar reservations about Henry Fonda‘s performance in John Ford‘s Young Mr. Lincoln. How did the ghost of F. Scott Fitzgerald feel about Gregory Peck‘s portrayal of him in Beloved Infidel?

Kenny beef #1: “I found The End of the Tour risible. [This] very conventional independent film left me so angry I actually had trouble sleeping the night I saw it. I lay awake obsessing over the best phrase that could sum up Jason Segel’s performance as Wallace. I came up with ‘ghoulish self-aggrandisement‘. For me, it recalls a line from a Captain Beefheart song: ‘I think of those people that ride on my bones.'” (HE insert: I think it’s fair to say that for most people the phrase “riding my bones” refers to some hulking behemoth putting the high hard one to a presumably willing recipient.)

Kenny beef #2 (i.e., the best paragraph in the piece): “Far from being a ‘channeling’ of Wallace, as some have called it, Segel’s performance is, to me, more of a feast of Heavy Indicating. A tic here, a tic there. Much brow furrowing. Even when the camera captures him from behind, you can see him thinking really hard about what it’s like to be such a tortured genius.”

Best sentence in the whole piece: “Wallace the artist and Wallace the conversationalist take a distant back seat to Wallace the eventual suicide.”

Back to normality: “Even when he’s cracking wise, there’s no light or lightness to the character. When uttering lines like ‘I’d rather be dead’ or ‘I’m not so sure you want to be me’, Segel might as well be nudging the viewer in the ribs. He, and the movie, insists that suicide loomed over everything Wallace did a full 12 years before the end.”

Kenny beef #3: “Segel’s Wallace is never really dark, either. He’s just Kinda Sad. This is a movie for those people who cherish This Is Water as the new Wear Sunscreen: A Primer For Life. The literary critic Christian Lorentzen noted, in a recent New York magazine essay, that the movie manages to betray Wallace’s thought in Wallace’s own words, and that’s almost exactly true.”

I have to say that in every photo I’ve seen of Wallace he looks like the same scraggly-faced, raggedy-coiffed, beefy-bodied, bandana-wearing dude. And while Segel seems a bit bigger and hulkier than the Real McCoy, he does seem to have this look down to a science.

July 29, 2015by Jeffrey Wells16 Comments
« Previous post
“Most Hated Man in America Who Never Advertised Jello Pudding on TV”
Next post »
Loathsome Sacramento Lightweights Try To Pull Cara Delevingne Down To Their Level