I tapped this out a couple of hours ago in the comment thread for “Who Needs It?“: “The older Richard Brooks‘ In Cold Blood gets, the more Hollywood-ized it seems. Much of the film has always struck me as an attempt by Brooks (who once sat right next to me in a Manhattan screening room during a showing of his own Wrong Is Right) to almost warm up the characters and make them seem more ingratiating and vulnerable than how they were portrayed in Truman Capote‘s nonfiction novel.

“You can always sense an underlying effort by Brooks and especially by Robert Blake to make you feel sorry for and perhaps even weep for Perry Smith. That guitar, the warm smile, the traumatic childhood. Take away the Clutter murder sequence and at times Blake could almost be Perry of Mayberry. Scott Wilson‘s Dick Hickock seems a little too kindly/folksy also.

“These are real-life characters, remember, who slaughtered a family of four like they were sheep. I realize that neither one on his own would have likely killed that poor family and that their personalities combusted to produce a third lethal personality, but I could never finally reconcile Blake and Wilson’s personal charm and vulnerability with the cold eyes of the real Smith and Hickock (which are used on the poster for the film).

“In Cold Blood is nonetheless a striking, reasonably honest, nicely assembled re-telling of the Smith & Hickock story. I respect it. I worship Connie Hall‘s cinematography. I love the editing. Quincy Jones‘ blues combo score is partly haunting and even mesmerizing and partly laid on too thick at times. The film is certainly a cut or two above mainstream fare of the ’60s. But it’s not a great film. It feels a bit too cloying and manipulative too often. Those memory and dream sequences (the sound of the mother’s voice going “Perrrry!”) are a bit much.

HE reader Michael Gebert posted this in response: “Yes, I think this is right and well put. It’s made at kind of the last moment of postwar FDR-Kennedy liberalism that was idealistic about the possibility of reforming, well, everything, if we can catch it early enough with a big dose of Freud.

“It’s sometimes referred to as noir, just because it was one of the last big-studio features in black and white, but it’s the complete opposite of noir, which assumes that society is as dirty as the criminals and chance bets against you. This is a throwback to New Deal crime films like 20,000 Years in Sing Sing or Angels Have Dirty Faces. Within a few years that idealism would be completely overthrown, criminals would be taunting maniacs like Manson or Andy Robinson‘s Zodiac type in Dirty Harry, a lower species in need of wiping out. Kind of amazing to think that in five years, social attitudes could change so rapidly.

“So yes, it’s exceedingly well made, but lives in such a different world that it’s hard to relate to. It’s certainly hard to find any sympathy for the mindless thugs who killed the Clutters like cattle in their basement.” 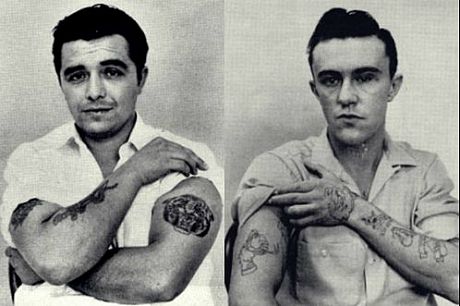 August 30, 2015by Jeffrey Wells15 Comments
« Previous post
Nothing Worse Than A Food-Staring Guy
Next post »
Who Needs It?