Yesterday morning I read a 7.28 Yahoo piece by Oliver Lyttleton called ‘Waterworld‘ Turns 20: How Costner’s Apocalyptic Adventure Became One Of The Biggest-Budgeted Fiascos of All Time.” So I’m missing the 20th anniversary by a couple of weeks, but I played a part in trashing the film’s reputation when I was filing for Entertainment Weekly and the L.A. Times Syndicate, and I’m feeling a tiny bit guilty about that. And so I reached out to Costner as well as veteran publicist Bruce Feldman, who was p.r. chief at Universal from ’93 to ’95 (here’s a piece he wrote a few months back about fixing the Oscars), and they both gave me some quotes — Costner by text, Feldman on the phone. 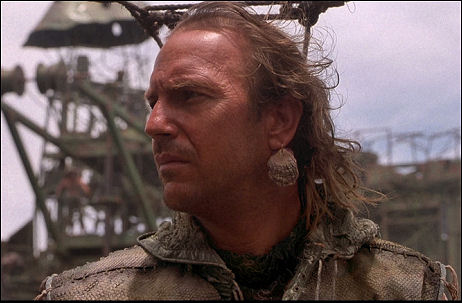 And then I re-watched Waterworld for the first time since catching it at a Los Angeles all-media screening just before the opening. And you know what? It seems to have “improved” slightly. It’s really not bad. It’ll always be indebted to George Miller‘s Mad Max films but that aside Waterworld has aged reasonably well. It’s not a great film but an urgently inventive spectacle, afflicted with logic plotholes here and there and certainly with a weak ending, and it still feels to some extent visually frustrating (why didn’t they shoot it in widescreen?). And I still maintain that Alfred Hitchcock‘s Lifeboat conveys a fuller sense of the moody, irascible energy of the ocean, despite having been shot in a studio tank with rear projection.

But Waterworld is certainly ambitious in its attempts to both excite and intrigue and provoke serious thought about climate change. And it’s mostly a real-deal practical thing except for a few obvious CG detours. And it wound up making a reasonable profit at the end of the day. (So Lyttleton was wrong in this sense.) And it’s not a fucking superhero film.

I began with Costner by texting the following: “As you know or may remember I was reporting and hammering pretty hard on Waterworld when I was writing for Entertainment Weekly in the mid ’90s. And it kinda seems better now than it did back then. The one-line review that I recall someone saying after the first screening was ‘it doesn’t suck.’ Which may have sounded cruel from your perspective but was actually an acknowledgment that for all the toil and trouble and headlines, the movie itself wasn’t half bad. Anything you want to say or reflect upon 20 years later?” 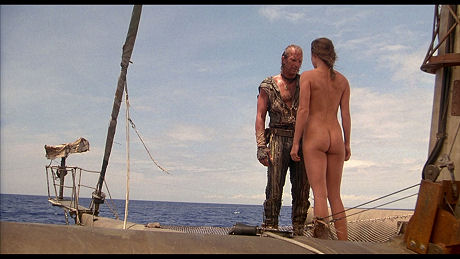 Costner: “If [that] quote was designed to offer some measure of support at the time, it didn’t. I’m not sure you know how hard people work [on films]. I’m not sure you know how beloved the movie is around the world. Being hard [on a film] is really easy if you don’t know the underbelly of what [went into it]. When you do know the forensics of a movie — the participation and decisions of others that one has to stand in front of — you can’t help but see it differently.

“That said you have reached out. You are looking back and only you know why. I know that people might think of Waterworld as a low point for me. It wasn’t. It could have had a better, more obvious outcome. The thing I know is that I never had to stand taller for a movie when most were going the other way. The movie with all its imperfections was a joy for me…a joy to look back upon and to have participated in.”

Wells: “I know very little about making films, Kevin, but I do know that even making something that’s passably good or relatively decent or which at least hangs together in a competent way…I know that even this is incredibly difficult. Making a first-rater or a near masterpiece like Open Range or Field of Dreams or Dances With Wolves or JFK is a whole ‘nother realm. I respect Waterworld as far as it goes, and I think most people are on the same page. The gotcha tone of ’90s press coverage (which I was part of back then, I regret to say, as I was looking to compete and survive in a rough-and-tumble profession by doing the bidding of my masters) led to perceptions and tagging that may not have been fair in some respects. I hope you know and understand that I am a relatively free man these days & have been since I started my column back in ’98. I’m an admirer of much of your work and will remain so in all likelihood.”

Costner: “I understand. I hope you have a chance to watch Waterworld again on a very minimal green screen. That was me flying around the boat, up and down on the mast and in the water. Not overly dramatic but just the way it was. Again good luck to you. ‘Nothing’s free in Waterworld'” 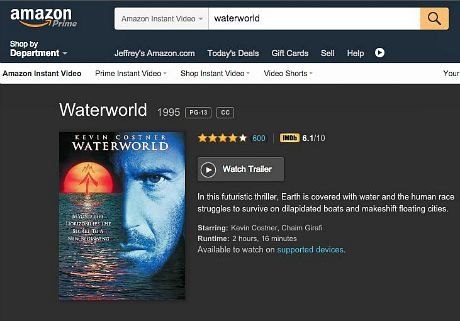 Then I called Feldman (whom I’ve known since the mid ’80s) and we chatted a bit. He naturally oversaw a lot of films during his tenure but a larger and larger amount of Feldman’s energy went into dealing with wolfpack journalists who had the scent of Waterworld in their nostrils and had bought into the disaster-in-the-making legend. The truth is that despite Feldman’s herculean efforts they pretty much succeeded in depicting it that way. And yet Feldman was right on the front lines, talking and schmoozing and thrashing it out, playing the facilitator and negotiator and fabric softener any way he could.

Yesterday I passed along the gist of Costner’s remarks, and then Feldman agreed to an on-the-record quote as follows:

“I agree with Kevin wholeheartedly, and it’s kind of expressive along the lines of what I had with the press. There were a lot of problems with the film. I was on the set in Hawaii for a couple of days. The production designer was Dennis Washington, and it was a massive brilliant set on the water and very difficult to work on, and if you look at the film itself, and the filmmakers and Kevin in particular…they were trying to do something…not only make an entertaining spectacle but a meaningful parable. Some people in Hollywood just make a lot of crap and justify it because people will pay to see it…but there’s another kind of ilm, and I give [Costner and Reynolds] full credit for trying to do something that made a difference and was important to do.

“The problem as I see it, is that many films I’ve worked on, films I’ve worked on during my 40 years…many of which have been villified before they were made or released, such as when I worked with Francis Coppola during the Zoetrope days. It boils down to this, which is that the press loves you until they don’t. And once they’ve decided to [target] you they describe you as if you’re a leper who will never ever make another significant contribution again.

“We’ve all had our ups and downs. But to report about filmmaking without good judgment, kindness, common sense. Not to say [journalists] should be anything other than uncritical or unanalytical…but for Chrissake, they should at least use common sense. It isn’t always a black-and-white situation. 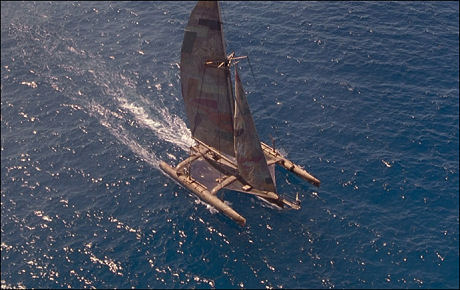 “My observation about movie stars is that everyone wants a piece of them, at every moment. They want to be his friend or whatever. I wonder if there isn’t some justification for their behavior. Kevin was under a lot of pressure, and at the end of the day the film did quite well. Everything in Hollywood can’t be perfect…you can’t be perfect…some things work out brilliantly and some don’t. In general people who are in this business…they should grow up and be adults. Not that they didn’t deserve it at times.

“I had this very discussion with lots of journalists. And my observation is that…I’ll probably get villified for saying this, but I felt that my job was to keep the press honest. What that means is to keep the press realistic and responsible.

“As Tom Pollock used to say that it’s Universal’s money, and Universal, like any business…the task is to spend money to make money….you make an investment in what you think is going to make money. And if it fails…does that mean that a crime against humanity has been committed?”