Not So Fast, Harris, With Your Basking in Glow of Tarantino Upvote

In a compilation of “out-takes” from Lane Brown‘s Vulture q & a with Quentin Tarantino, the director-writer says that Grantland‘s Mark Harris “may be the best film writer ever, when it comes to these historical, slightly critical books that he does.” In other words, Harris is very good at assessing not just films and filmmakers but their impact and importance in a broader social-historical context.

But if Harris is so admired and accomplished at this particular thing, why did he totally ignore the malignant 75-ton elephant in Tom Cruise’s living room when he recently wrote about the 53 year-old superstar in a Grantland career-assessment piece? As I remarked on 7.29, “How can Harris write a here-and-now assessment of Cruise and not even mention Alex Gibney‘s Scientology doc and the portrayal of Cruise as an enabler/promoter of an unmistakably venal, predatory and vicious-minded organization? Particularly with Gibney’s doc having aired only a few months ago? How can Harris ignore that and just say ‘ah, well, too bad Cruise isn’t interested in the meaty acting roles any more’?”

Director-writer Paul Haggis (Show Me A Hero) conveyed a similar complaint about the press in general in an 8.23 interview with The Daily Beast‘s Marlow Stern.

When Stern pointed out that the “conversation” about Cruise’s Scientology connection has “petered out”, largely due to Mission Impossible: Rogue Nation‘s huge box-office success, Haggis said that “we forgive anybody anything if they’re a movie star, I guess!” Stern added that Cruise didn’t even address Going Clear or Scientology during the press tour for Rogue Nation.

“Well, that’s not his fault,” Haggis replied. “His p.r. people are very smart. But I don’t know how journalists can continue to call themselves journalists if they aren’t brave enough to ask a question. I mean, how big does the elephant in the room have to be before you ask about it? There was this huge elephant there, and every journalist agreed not to address it. Why? You’re just a p.r. person at that point. Shame on you.” 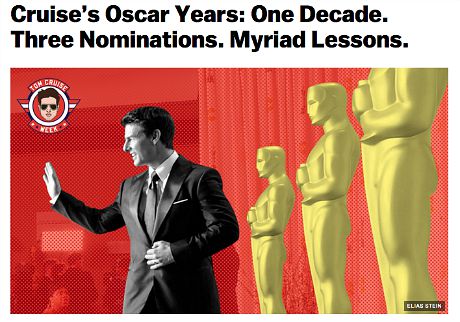 August 25, 2015by Jeffrey Wells33 Comments
« Previous post
“She Stinks A Bit But We Could Wash Her” — King Henry II in Becket
Next post »
Another One