Two days ago Awards Daily‘s Sasha Stone posted a rundown of the likeliest Best Actress nominees. She mentioned 12 contenders but she’s just being nice. There are only four serious hotties:  (1) Suffragette‘s Carey Mulligan (not to mention her arresting performance in Far from The Madding Crowd), (2) Brooklyn‘s Saoirse Ronan, (3) Joy‘s Jennifer Lawrence and (4) Carol‘s Cate Blanchett.  I don’t know about the fifth slot but it’s up for grabs. 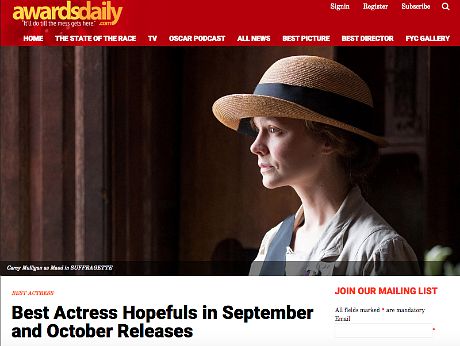 People may feel persuaded to give Blanchett her second Best Actress Oscar after she won In early ’14 for Blue Jasmine, but they’re probably going to want to spread the wealth by giving the Oscar to Ronan, Lawrence or Mulligan. Ronan’s Brooklyn performance (she plays a young Irish immigrant torn between two nice-guy suitors) is solemn and understated and quietly mesmerizing. And yet I’m sensing that Mulligan and Lawrence’s roles — a working-class campaigner for woman’s voting rights in early 20th Century England and a go-getter mom struggling to compete in a rough-and-tumble business environment — are showier and punchier than Ronan’s…right?

I’ve only seen Carol and Brooklyn and know nothing substantive about Joy and Suffragette.  But insect antennae vibrations are the great forecasters.

The two top maybes are Sandra Bullock, who may or may not have “one of those roles” in David Gordon Green‘s Our Brand is Crisis (something feels a bit iffy and uncertain about this one…be careful), and Grandma‘s Lily Tomlin, who scores affectingly as a pissy, contentious 60ish woman who helps her granddaughter raise money for an abortion. Tomlin could land the fifth slot if she gets out there and campaigns like Hubert Horatio Humphrey in the 1960 Wisconsin primary

Sicario doesn’t give Emily Blunt enough to do except look emotionally drained and devastated by the horrors of the Mexican drug-dealing carnage…forget it. Watching Macbeth is like slowly sinking into a combination of cold oatmeal and hot quicksand, and while Marion Cotillard is “good” as Lady Macbeth, all you want to do is escape from the theatre so you can take a shower and get a manicure (because everyone in Macbeth has dirt under their fingernails) and go to an Indian restaurant…no action for Cotillard, trust me.

There’s room for only one award-calibre performance as a transgender character this year and that’s Eddie Redmayne in The Danish Girl, so Elle Fanning’s performance in About Ray, however good or brilliant or knockoutish, will have to step aside…sorry. Bel Polowy won’t even stir talk about a possible Best Actress nomination for her performance in Diary of a Teenage Girl…no way. And the star of Crimson Peak is Guillermo del Toro, I’m afraid, and not Mia Wasikowska.