Millenial Actors Letting Us Down, Getting Elbowed Aside By Brits

The thrust of this Terrence Rafferty piece in The Atlantic is that under-40 American actors don’t have the chops and the snap and the vitality that same-generation British actors do, and that this American fraternity of younger male thesps is…well, what’s missing exactly? Is it because they’re too cautious, “ironic”-minded or insincere or just…what, confused? The point is that things were hopping for young American actors in the ’70s and to a slightly lesser extent in the ’80s, ’90s and early aughts…but not now. The faces of Chris Pine, James Franco and Chris Evans comprise the art but who else could be included? 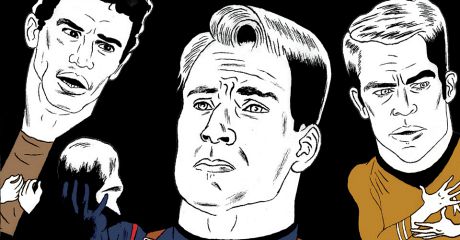 “Is it time for American actors to take a hard look in the mirror?,” the piece begins. “Earlier this year Michael Douglas mused darkly to a magazine interviewer, ‘I think we have a little crisis going on amongst our young actors at this point,’ and Spike Lee, commenting on the “invasion” of black British actors, had some pithy observations on the subject, too: ‘You want talented people,’ he said, and British actors’ ‘training is very proper, whereas some of these other brothers and sisters, you know, they come in here and they don’t got that training.'”

One exception, Rafferty feels, is Michael B. Jordan (Fruitvale Station, Creed). Another, I believe, is Paul Dano, who is so far still (i.e., among movies that have been released in 2015) the leading Best Actor candidate for his Brian Wilson performance in Love & Mercy. And let’s not forget Jake Gyllenhaal, of course, and his brilliant Nightcrawler performance. (Southpaw, not so much.) And, I suppose, Jesse Eisenberg, but I have this feeling that he’s been half-slumming since The Social Network.

Remember that Leonardo DiCaprio, Joaquin Phoenix, Christian Bale and Johnny Depp are now 40-plus and more or less middle-aged so they can’t be included. Remember that Michael Fassbender, 37, is German Irish and Ryan Gosling, 34, is Canadian.

“The Brits have now become so good at imitating Americans that there’s hardly an American role you can’t imagine them in,” Rafferty writes. “If The Godfather were to be made today, you might see Daniel Day-Lewis as Don Corleone, surrounded by, say, Tom Hiddleston as Michael, Rory Kinnear as Sonny, Ben Whishaw as Fredo, Benedict Cumberbatch as Tom Hagen, Keira Knightley as Connie, and Romola Garai as Kay. What’s worse, it isn’t nearly so easy to dream up a fantasy cast of American actors that would be as strong.”

Tom Hiddleston as Michael Corleone? No way. Nor could Hiddleston play Johnny Fontaine. He couldn’t even play Carlo or Rocco. He’s too WASPy and wimpy looking.

Rafferty suspects that Michael Douglas “was mostly thinking about the men. The fact is, the women are fine. (Their problems will begin when they hit 50.) If you’re a producer or director looking for an actress under 40 and can’t find one you like among Williams, Russell, Chastain, Acker, Stewart, CFitzGerald, Jennifer Lawrence, Emma Stone, Reese Witherspoon, Elisabeth Moss, Dakota Fanning, Shailene Woodley, Rosario Dawson, Scarlett Johansson, Anne Hathaway and Zoe Saldana you’re being, I’d say, way too picky.”