Nobody Knows Anything, Especially These Guys

Gold Derby‘s Tom O’Neil has launched the 2015 Oscar season speculation with a poll of “experts” (which I contributed to last night) along with a user/reader poll. The users poll is mostly bullshit, of course, but it gives you a rough idea about which films and actors have the heat among the pseudo-informed, industry-watching outliers. I don’t know much more but I can offer some strong positive or negative suspicions here and there, particularly in the Best Supporting Actor and Supporting Actress categories. 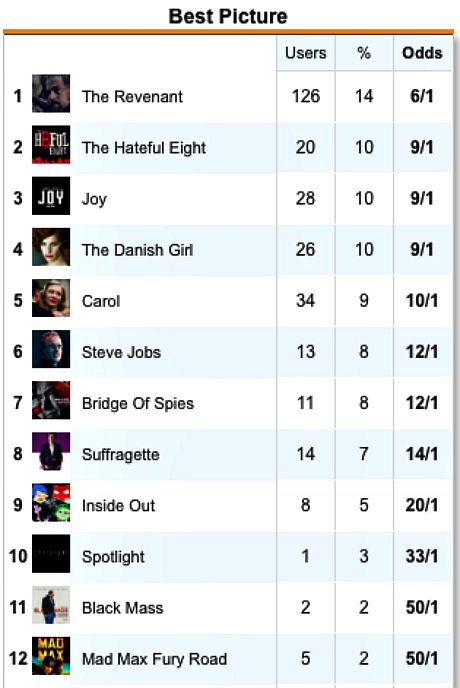 Best Picture: The Revenant will most likely emerge as the industry front-runner before long, and it has the vague advantage of being an unknown until it starts screening around, I’m guessing, 11.20 or thereabouts. Having read the script and seen a live reading of The Hateful Eight, I have very little belief in its Best Picture chances. Joy and The Danish Girl are inevitable; ditto Carol and Steve Jobs. If you ask me the first-rate Brooklyn is also a fairly strong contender, but not so fast when it comes to Bridge of Spies and Suffragette. Forget Inside Out — it’s relegated to Best Feature Animation and that’s that. Nobody in my realm knows squat about Spotlight and Black Mass. I agree with Kyle Buchanan that Mad Max: Fury Road deserves a Best Picture nomination but who knows who that’ll play? Beasts of No Nation, an allegedly strong entry, will probably never snag a Best Picture nomination, given the gruesome subject matter. 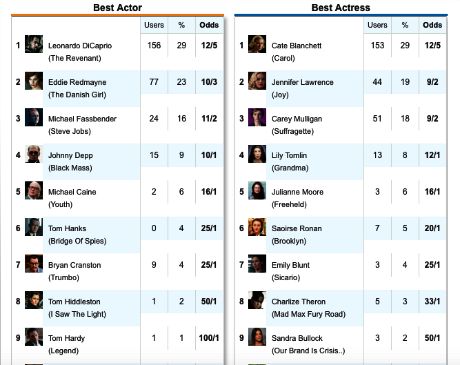 I’ve already riffed on the four likeliest Best Actress nominees: Joy‘s Jennifer Lawrence, Carol‘s Cate Blanchett, Suffragette‘s Carey Mulligan and Brooklyn‘s Saoirse Ronan. The fifth slot could be filled by Grandma‘s Lily Tomlin (especially if she gets out there and campaigns like her life depends on it), Mad Max: Fury Road‘s Charlize Theron or Freeheld‘s Julianne Moore. 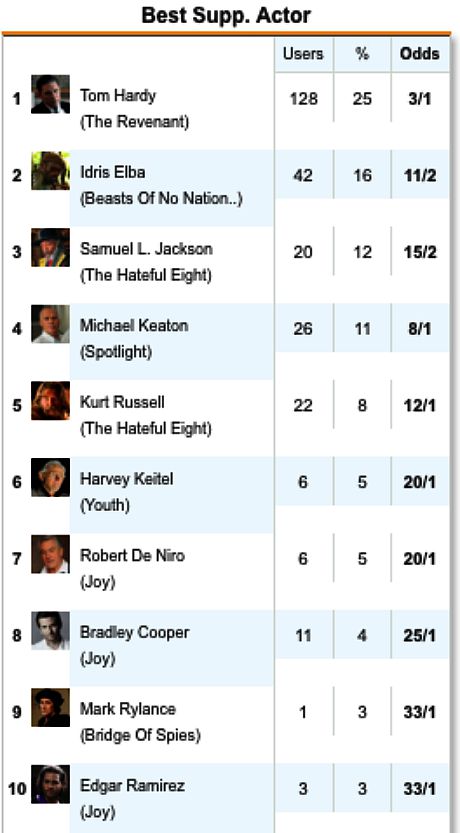 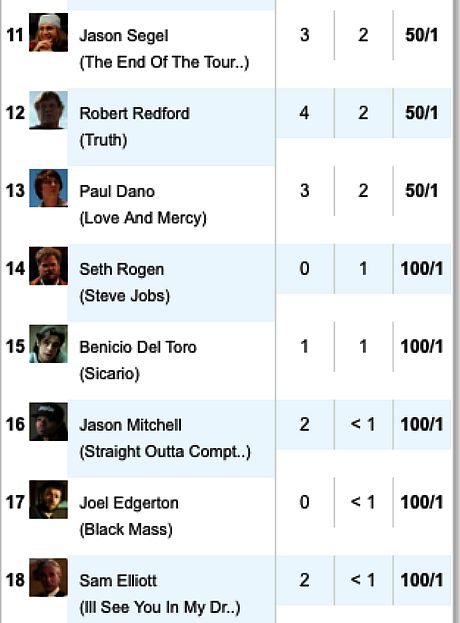 Gold Derby‘s Best Supporting Actor speculations seem screwed up to me, at least as far as the ranking of Love & Mercy‘s Paul Dano is concerned. The Derby users have him ranked in twelfth place when he should be in first. (There’s no question that Dano’s performance as Brian Wilson is masterful.) Having read the Steve Jobs script I wouldn’t be surprised if the jocular and punchy Seth Rogen scores a nomination as Jobs associate Steve Wozniak. It’s been said that Black Mass‘s Joel Edgerton also scores fairly distinctly. The Revenant‘s Tom Hardy may land a Best Supporting Actor nomination if and when his Legend performance doesn’t appear to be cutting the competitive mustard. I’m also hearing that Beasts Of No Nation‘s Idris Elba may rate strongly. Glenn Kenny‘s objections side, The End of the Tour‘s Jason Segel might also push through. I don’t have a clue about any others.

The likeliest Best Supporting Actress nominee, hands down, is Carol‘s Rooney Mara, who won a Best Actress award for the same performance at the end of last May’s Cannes Film Festival. The second strongest contender is Youth‘s Jane Fonda — trust me. I’ve been told that I Saw The Light‘s Elizabeth Olsen is phenomenal as Hank Williams‘ wife and performing partner, and no consideration of contenders in this category would be complete without Love & Mercy‘s Elizabeth Banks — her performance as Brian Wilson’s wife and savior, Melinda Ledbetter, is easily the best she’s ever given on-screen. I don’t know or sense anything else about anyone else in this category.