Two days ago I posted about comments from Steve Jobs screenwriter Aaron Sorkin on a recent Charlie Rose Show. I was taken by Sorkin’s view that deep down, Steve Jobs “felt flawed and unworthy of being liked, unworthy of being loved…and to compensate for that, had the remarkable ability to infuse these products with lovability.” A keen insight, I noted, but not one I remembered being voiced in the film.

I was wrong.  This morning Toronto Star critic Peter Howell pointed out that right at the end Jobs tells his daughter (i.e., Lisa) that “I’m poorly made.” Howell: “I thought that very succinctly sums up how Jobs sought the perfection in his machines that he lacked in himself.”

Also: In addition to “I’m poorly made,” there’s an exchange between Jobs (Michael Fassbender) and Steve Woz (Seth Rogen) from the final act: Woz: “Your products are better than you, brother.”Jobs: “That’s the idea, brother.”

Late this morning Boxoffice.com’s Phil Contrino joined Sasha Stone and myself for a pretty good discussion about several things, and not just the stalling of Everest, the death of The Walk and the non-interest in Pan. The initial reception this weekend to Steve Jobs and what might happen when it goes wider. The curious but undeniable popularity of The Martian — #1 for two weeks in a row. Sasha brought up the astounding popularity of Jurassic World — a bad movie in so many ways I don’t want to think about it. The re-starting of the Love & Mercy bandwagon was also mentioned. And then Sasha and I brought things home with (a) a discussion of the recent Joy research screening, (b) guesswork about the reception to four 10.16 openers — Room, Truth, Bridge of Spies and Beasts of No Nation, and (c) three or four other topics that you’ll probably appreciate more if you don’t ponder them in advance. Again, the mp3.

I drove some guy’s car across the country in ’75. I’d been “hired” in a manner of speaking by some hip-pocket transport company that was moving cars from one city to another for clients who didn’t want to pay exorbitant rail-transport fees. It was an L.A.-to-New York trip except I had to pay for all or part of the gas. (Or so I recall.) I’d run an ad looking for people to share driving plus gas expenses, and I’d chosen some Israeli guy and some dippy, under-educated girl, both in their 20s. We decided to drive straight through, night and day. It took us about 52 hours to arrive at the Lincoln Tunnel. In any event about halfway through the trip I fell asleep in the back seat around 2 or 3 am, and I remember being woken up by this song around dawn as we drove through western Kansas on some rural road.

It was not a pleasant awakening. It was actually kind of nightmarish. I was at the bottom of the pond but starting to rise to the surface — still sleeping but coming around. I could feel a sense of motion, of course, but my eyes were still closed and I was still half-dreaming. And then someone in the front seat suddenly turned up the radio and “oogah, oogah, oo-gahchaka, oogah, oogah, oo-gahchaka” jolted me in some kind of primal way. In my near-dream state it sounded like a bunch of gorillas had gotten inside the car and were about to pounce on my ass…”the fuck!” Then I sat up, rubbed my face, collected my senses and realized where I was and what was happening.

20 Comments
A Distributor With Three Serious Best Picture Nominees To Push, and Two of Them Opening on the Same Day

It’s been commonly assumed for months that Alejandro G. Inarritu‘s The Revenant and David O. Russell‘s Joy, 20th Century Fox releases that will open side by side on 12.25.15, will probably be nominated for the Best Picture Oscar. But now it’s becoming more and more accepted or presumed that Ridley Scott‘s The Martian is a serious contender also. Three big-deal, year-end movies from the same studio vying for Best Picture — only the third time in Hollywood history.

Grantland‘s Mark Harris reminds that Paramount was in the same position in ’74 (or actually early ’75) — The Godfather, Part II, Chinatown (tied for the most nominations) and The Conversation were all nominated for Best Picture.  Joshua Rothkopf points out that Fox also pulled this off in 1979: All That Jazz, Breaking Away & Norma Rae.

The Inarritu seemed like a foregone conclusion after the first trailer popped but expectations about the Russell have surged in the wake of reactions to a Joy research screening that happened last Wednesday, one of those being that Joy is not a spirited dramedy a la Silver Linings Playbook but more or less a straight drama in the vein of The Fighter. And now everyone seems to be saying that The Martian, which opened nine days ago, will become a Best Picture nominee also.

The latter won’t won’t win because you can’t give a Best Picture Oscar to a scientific-minded Jerry Bruckheimer ensemble rescue movie, but it’ll probably be nominated.

The result is that 20th Century Fox is now obliged to contend with a historically unusual situation. It’s been 41 years since Paramount had three of its films nominated for Best Picture, as noted. When was the last time that a distributor even had two of its own films vying against each other, so to speak? Answer: See Kris Tapley‘s post below.

It’s even more interesting when you consider that The Revenant, Joy and The Martian are three different kettles of fish.

I’ve been wanting to feast my eyes on a high-def version of Robert Zemeckis‘ Used Cars (’80) for a long while, but the last time I checked (i.e., about 18 months ago) the only option was a Twilight Time Bluray on Screen Archives for $29.95. And that price was too fuckin’ high! But now you can buy a high-def version on Amazon for only $12 or rent it for only $4. That works. 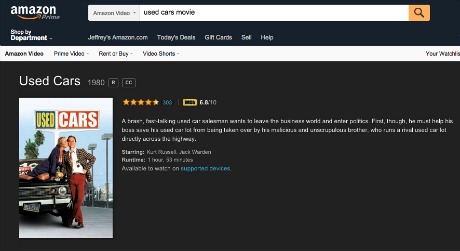 “Easily one of the funniest and most pungent social farces ever cranked out by semi-mainstream Hollywood. Written and created in the tradition of the great Preston Sturges. Zemeckis in his early glory. World-class performances by Kurt Russell, Jack Warden, Frank McRae (i.e., the Inflation Monster in the clip below) and the legendary Gerritt Graham.” — posted in April 2014.

The following David Thomson piece, titled “A Thing of Wonder,” was posted on Indiewire on 6.22.15: “There is a thing of wonder out there, and it is in an unexpected place, what we can only regard as an American entertainment movie. More than that, as I have returned to the picture over the last few weeks, I find that its audience is growing, as if enough people are saying, ‘You really should see Love & Mercy‘ — as if people still trust friends to talk to. 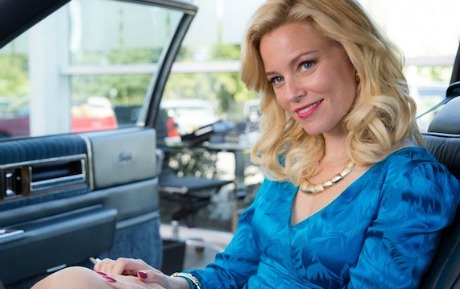 “I like Bill Pohlad’s Love & Mercy very much, even if it drifts a little from time to time. I don’t know or really care whether it is a reliable portrait of the life and times of Brian Wilson. But I never thought to worry whether The Glenn Miller Story or New York, New York were ‘accurate.’ After all, people in American show business have gone there to escape the clinging and demeaning tests of fact and credibility.

“So I have always admired Brian Wilson’s harmonic head and assumed that he was an unstoppable mess. I am at ease with his part in the film being given over to Paul Dano and John Cusack (and even the director’s son), and I took it for granted in advance that Paul Giamatti would be deliciously vile and scary as Dr. Eugene Landy.

“But the thing of wonder is Elizabeth Banks who holds the film together with her extraordinary performance as Melinda Ledbetter.

“I know, there was a real Melinda; she is married to Wilson; they have five children; and I hope they are as happy as possible. But I’m not really interested in that. Instead, I want you to consider the creation and the potential of an attractive, very groomed blonde aged forty-one (the age of Elizabeth Banks now), who is a Cadillac saleswoman in Los Angeles.

Two days ago a Vanity Fair-sponsored discussion between J.J. Abrams and Brian Grazer was posted. (Chief Apple designer Jony “who?” Ive also took part.) The two Abrams statements that have popped since the video appeared are, of course, about Star Wars VII: The Force Awakens. One, Abrams has final cut (“Yeah, yeah”) and two, Disney honchos Bob Iger and Alan Horn are “not trying to Disney-fy it” — i.e., soften it into an upbeat family thing with sparkly pixie dust.

The second statement obviously implies that there are aspects in a recent cut of The Force Awakens that could, theoretically, be Disneyfied. Aspects that a senior Disney executive with a robotic longing for tidy, conservative, audience-friendly vibes could have a problem with. This indicates that Awakens might have elements and currents that are Empire Strikes Back-ish. Maybe. In a more perfect world. Or in the one we’re living in. Who knows?

I am down on my knees with my eyes moist and hands clasped, and with a slight crack in my voice: “Please, please have the courage to deliver something heavyish and whoa-level in the second or third act of this thing. Please be worthy of the tradition established (and then quickly abandoned by George Lucas with 1983’s Return of the Jedi) by The Empire Strikes Back. Have fun and be cool, but please don’t be afraid of the way life can sometimes go in any realm. You guys know exactly what I mean. The farther this movie stays clear of Jupiter Ascending, the better. And the closer it gets, the worse for all of us. Please, God…remind us that every so often your benevolence can be real.”