“For many of us going to movies is like going to church. We go over and over and most of the time you don’t get very much, but it’s all worth it when a movie delivers the great beauty and the transcendence and the kiss of God, like from a great sermon. And that single ectstatic episode — that fix — is enough to keep us going back for years to come.” 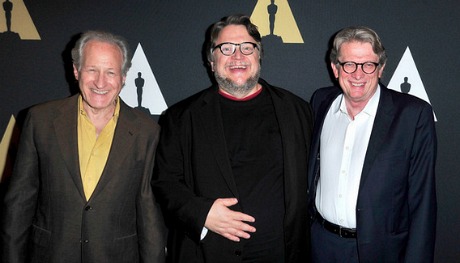 This was the Guillermo del Toro quote that stayed with me as I shuffled out of last night’s discussion between the legendary director and interviewer Kerry Brougher at the AMPAS auditorium (i.e., the Samuel Goldwyn theatre).

The talk started out problematically with Brougher kissing Del Toro’s ass over and over, but eventually he let GDT have the floor and after that everything was fine. There is really no one more articulate, perceptive and spiritually imbued than Mr. Del Toro on the subject of film. Or any any subject. But we all know this. The discussion last for just over 90 minutes, and that was exactly right.

My own cinema = church thought, posted nine years ago: “Every time I walk into a plex or a screening room it’s like entering St. Patrick’s on Fifth Avenue or St. Julien le Pauvre in Paris. If you’re not feeling awe as you enter a theatre, why go? What is moviegoing if not a ritual about great possibility? The chance that something jolting or transcendent might happen?”

I went to last night’s event with HE’s own Svetlana Cvetko and her editor/partner David Scott Smith. We’d invited GDT to meet us for a post-event drink but he’d been invited to dinner at Craig’s with the great Michael Mann (who introduced the event) so that was that.

We wound up going to Pizzeria Mozza. I ate three modest slices of garlic bread while waiting for the pizza, and Svetlana later pointed to that and claimed I’d eaten a pound of the stuff. This is why you can’t eat bread with other people — they’ll just use it against you.

October 8, 2015by Jeffrey Wells6 Comments
« Previous post
Listen to This Guy
Next post »
Can Through-The-Roof Joy Reactions Be Trusted?