All Hail All Things

The bright and affable Madelyn Hammond (a.k.a. “the Job Whisperer”) interviewed the core trio behind All Things Must Pass following last night’s 7:45 pm Arclight screening — director Colin Hanks, producer Sean M. Stuart and, most legendarily, Tower Records founder and human locomotive Russ Solomon, who hits (or already has hit) his 90th birthday this year. Hollywood Elsewhere, sitting front and center, captured some of it on an iPhone 6 Plus.

From 10.2 HE review: All Things Must Pass “is not only a chronicle of a mythical record-store mecca but a farewell valentine to the now-concluded era of the record (or video) store as a family meeting place — an organic, tactile clubhouse where you went to hang and converse and debate as well as occasionally buy stuff.

“Streaming has made everything bountiful in terms of access but the face-to-face community aspect is toast. Social media is a chillier, lonelier way of communicating. Which is why I still go to Amoeba once or twice a week. Half the time I’ll decide to rent a streaming version of a Bluray I’ll see in the racks or pay less money by buying online, but I go for the visitation vibes, the personalities, the energy, the people-gazing. 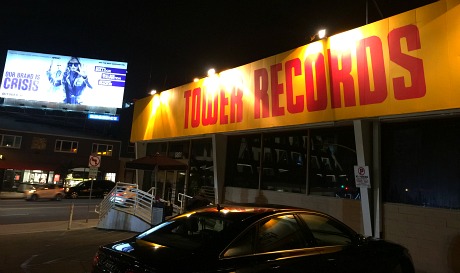 The former home of Tower Records on the Sunset Strip was re-dressed with Tower signage a couple of days ago, and it was still there last night. Snapped an hour or so after the All Things Must Pass q & a at the Arclight.

“This thing is emotional. Especially that. If you lived through and savored the Tower Records heyday (mid ’60s to early aughts but more essentially the ’70s, ’80s and ’90s) it’ll open the floodgates big-time. The doc is full of characters and personalities and the usual eccentricities and foibles. It’s not just a recitation of occurrences or statistics. It’s about the heartbreak of time, about the cost of loss and how it all falls away sooner or later. It’s about ‘what happened to the fun?’

“This is what All Things Must Pass puts you in touch with — the way it all used to look and sound and feel 15, 20, 25, 30 and even 40 years ago. Because those days are gone, man. Move on, be here now, all things must pass — I get and accept all that. But I would have those old excessive times again. Not the ridiculously high CD prices but the personal eccentric stuff — that I miss.”