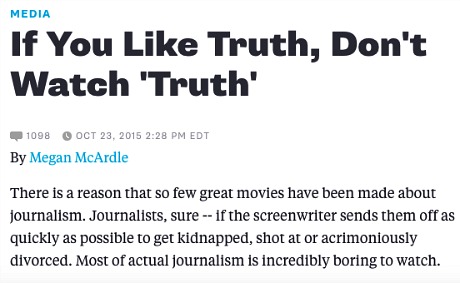 “Killian’s secretary told Rather in a follow-up 60 Minutes piece that while she didn’t type the memos used on the disputed 60 Minutes piece, their content was accurate. She didn’t say they might be accurate or were half-accurate — she said they were dead-on.

“By my sights Truth passes along a comprehensive and justifiably damning portrait of corporate cowardice on the part of CBS after the infamous episode.

“A colleague has already brought this up but here goes again: If Washington Post editor Ben Bradlee had acted similarly — if he had thrown Woodward and Bernstein under the bus when their story about H.R. Haldeman being named in Grand Jury testimony as the fifth White House official to control the Nixon re-relection team’s slush fund was attacked for being false (even though Haldeman was the fifth official to control the fund) — the All The President’s Men saga would have been quite different.

“Journalists like yourself believe that the film errs in trying to portray Mapes and Rather as flawed heroes, and that it’s too hard on CBS and not hard enough on Mapes, who didn’t do her job properly and deserved to be canned.

“You and yours are subscribing to a standard T.C.Y.A. approach — totally cover your ass — when it comes to researching and reporting stories. Ben Bradlee, Jr., whom I spoke to at the Spotlight party during last month’s Toronto Film Festival, has the exact same view. So does the Daily Beast‘s Marlow Stern and, I’m sure, many other top-tier journos.

“But the movie I saw doesn’t try to give Mapes and Rather a total pass. It makes it clear that they failed to be careful enough regarding the Killian memos, but also that they were fucked by lying or recanting sources.

“But Truth is also (and, I would argue, more importantly) about how CBS News management all too quickly cut them loose when the heat came down.

“The point of Truth is not that Mapes and Rather were blameless (the film makes clear there were reasonable suspicions that the Killian memos might not be legitimate), but that CBS management was craven and spineless in their handling of the matter.

“I think that Truth is a brilliant gray-area film that delineates all the particulars and allows the viewer to come to his/her own conclusions. It is scrupulous, exacting and very well ordered. Its claim about CBS honchos having been expedient and gutless feels reasonable and perceptive to me.

“Does the film stand behind Mapes and Rather? Yeah, pretty much, and for the simple reason that the content of their 60 Minutes story was true. Just as the disputed Haldeman story was true even though Woodstein’s Washington Post story was technically wrong because nobody asked former Nixon campaign official Hugh Sloan whether Haldeman was involved. Bad reporting is bad reporting, of course, but the truth is the truth.”