In The Matter of Walton Goggins

I’ve never derived the slightest pleasure from “rural”-looking actors playing lowlife redneck hicks, and so I’ve never been a fan of Walton Goggins. I realize he played Shane Vendrell on The Shield for eight years and then Boyd Crowder on Justified, and that he’s a respected actor as far as it goes. But he looks like a yokel with a nice suit — like the nephew of the guy who had his way with Ned Beatty in Deliverance. He played a submental yeehaw in Quentin Tarantino‘s Django Unchained, and now he’s playing another lowbrow, Chris Mannix, in Tarantino’s The Hateful Eight. 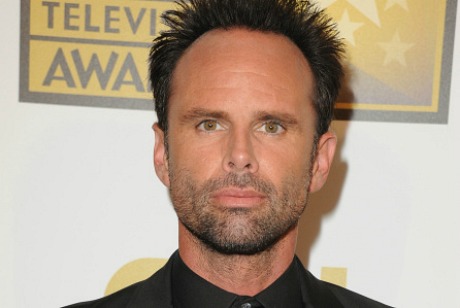 The reason I’m on this jag is that a director friend told me this morning that Goggins “more or less owns the film.” My friend doesn’t know that, mind — he’s just “been told” this so take it with a grain. Here’s how our conversation went immediately following:

HE: “Walton who?”
Director friend: “You’re joking, right? If not, you sure as fuck will know him by year’s end.”
HE: “I’m not joking. I’ve never watched The Shield or Justified and I’m extremely proud that I had better things to do, and I couldn’t give less of a fuck who Goggins is. I can’t even remember him from Django — if you’ve seen one lowlife rural dumbass with a shotgun and a hillbilly hat, you’ve seen ’em all.”
Director friend: “You’re serious?”
HE: “On top of which that name sounds like the name of a fucking hayseed. Walton Goggins sounds like Jethro McGillicutty or Bumblefuck Podkins or Dumbshit McCrackledoodle.”
Director friend: “That may be true. But he is also one of the most respected actors in town. He’s an adored actor. I double and triple fucking dare you to put up a column piece dismissing him. Your loyal readers will prison rape you for it.”
HE: “He’s a good-looking guy but that rural face, those chewin’ tobacco eyes. He seems to be straight out of Deliverance.”
Director friend: “Like I said, put your doubts up on your site and see what happens. He is one of our great actors although he does often play hicks — true. I’m told he has many offers now in anticipation of The Hateful Eight.”


“Great” actor? “Many offers”? This is a cynical effort to get people talking about Goggins. I’ve been around. I know this game. I’m just being used.

SAG member #1: “Have you heard about the awesome performance given by the great Walton Goggins in The Hateful Eight?”
SAG member #2: “No, I haven’t. But I know Walt. I’ve seen him at parties. He plays great rednecks and he looks like one, so I can’t wait. Plus Tarantino is a genius…”
SAG member #1: “I’m hearing it’s one of the greatest portrayals of a lowlife, ball-scratching yokel in the 21st Century.”
SAG member #2: “Awesome. I’m telling my wife. She once told me she wants to fuck Goggins. She told me she’d definitely cheat on me if she could manage that.”

A voice is telling me that Goggins is the new Tennisballhead.

October 13, 2015by Jeffrey Wells64 Comments
« Previous post
An Exquisite Period Romance That You Can Take Your Mother To (And That Is In No Way A Putdown)
Next post »
Tonight’s Democratic Snooze-In