From “Mad’s Glorious Anti-Smoking Campaign,” a 6.26.14 New Yorker piece by David Margolick: “In the early to mid-nineteen-sixties, both before and after the Surgeon General issued his famous report on the dangers of tobacco, Mad magazine took on the industry more than any ‘respectable’ magazine. Free from any dependency on advertising, Mad could be fearless, and it was. Its campaign of ridicule was unrelenting.

“The magazine attacked not just the tobacco giants but the folks on Madison Avenue who hawked the poisonous products — many of whom, it noted, were too smart to smoke themselves. Fifty years later, many who read Mad devotedly still remember the crusade. The ads closely resembled the real ones that ran on television and in magazines. There was the one for ‘Marble Row’ funeral directors, showing horses grazing in a graveyard. ‘You Get a Plot You Like,’ it declared. Or the ad promising that ‘Likely Strife separates the men from the boys…but not from the doctors.’ 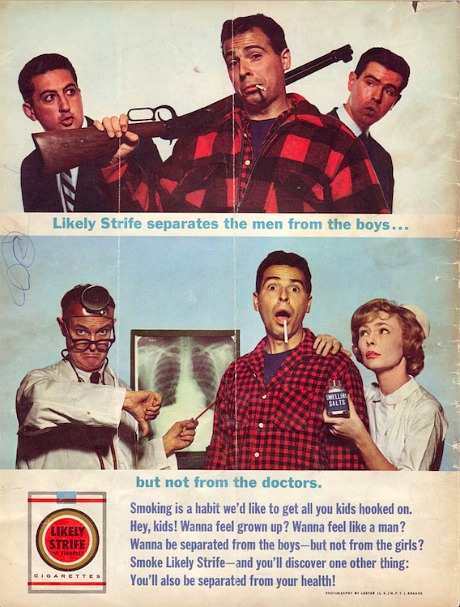 Initially posted on 5.28.09: “The only people I know in real life who smoke are (a) young and courting a kind of contrarian identity, (b) older with vaguely self-destructive attitudes, and in some cases beset by addiction problems, (c) serious “party” people with unmistakable self-destructive compulsions and tendencies, and (d) life’s chronic losers — riffraff, low-lifes, scuzzballs.

“Smoking is so uncommon these days that whenever I see someone lighting up I say to myself, ‘Wow, look at that.’ And yet smoking persists in movies, particularly in films depicting any kind of teenaged, criminal or anti-social milieu. When I was in high school smoking projected a kind of stand-alone studliness and a James Dean-like existential machismo, which everyone of my age bought into and which I felt was absolutely essential. I more or less began quitting in the ’70s. Relapses followed, and I also dabbled whenever I visited Europe. A stupid instinct but my life has been full of that.”

October 21, 2015by Jeffrey Wells13 Comments
« Previous post
To Live Outside The Law You Must Be Honest
Next post »
Biden Wouldn’t Have Beaten Hillary Anyway — Waited Too Long