Major Spartacus Bump: Restored Bluray More Finely Detailed Than 1960 Epic Has Ever Looked, In Any Medium

I’ve seen Stanley Kubrick and Kirk Douglas‘s Spartacus at least 15 if not 20 times, and in all kind of formats — big-screen celluloid projection, broadcast, VHS, Criterion laser disc, DVD and the discredited 2010 “shiny” Bluray that Universal issued five years ago. (And which I somewhat shamefully half-approved of for the simple reason that it looked much better than the 480p Criterion DVD.) Two days ago Universal’s new restored Bluray arrived in the mail, and I swear to God it’s never looked this needle-sharp and natural. It’s a digital knockout, and clean as a hound’s tooth. The difference between this newbie and the 2010 version is analogous to the difference between a run-of-the-mill DVD and a Bluray of anything. It really pops. I felt as if I was watching something almost “new.” 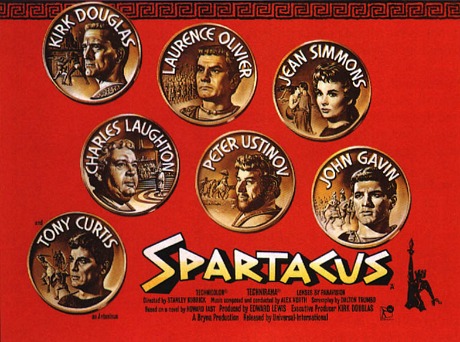 I’m told that every frame has a full measure of grain but I can’t see so much as a single Egyptian mosquito. We all know what grainstorms can look like, and this puppy has none of that. Plus there is extra information on all four sides, and the skin tones and shades of everything look completely natural and unforced. This is the Spartacus of the Gods — robust and radiant and more wowser, I’ll bet, than it’s ever looked, even when Douglas, Kubrick and producer Edward Lewis had a final looksee before the New York premiere in November 1960.

I’ve been told I need to take the Bluray over to a Best Buy and play it on a 70-inch Ultra HD set via an Oppo that’s been programmed to up-rez the data to 4K. I’m told that I’ll melt if I look at it this way.

It’s a little bit odd that the nine-minute “restoring of Spartacus” featurette gives the impression that this new version was primarily an effort by Universal Home Video technical staffers (led by vp technical services Peter Schade) with a little soupcon of freelance assistance from restoration guru Robert Harris. For 25 seconds during this nine-minute essay Schade states that Harris was brought in to consult while acknowledging that Harris, having overseen the 1991 photo-chemical restoration of Spartacus with Jim Katz, was definitely the guy to turn to.

In fact Harris pleaded with Universal to fund a new Spartacus harvest, which they didn’t want to do at first because they felt it would make them look foolish after having approved the “shiny” version. Once they agreed to a digital restoration Harris worked on it for about a year.

Harris: “When I originally met with the execs and techs at Uni in July of 2014, I suggested that they use the 65mm negative that I had created in 1989, as the basis of the new Blu. Do proper cleanup, re-register some shots, help lower contrast, and spend the big dollars doing a ground up along the lines of The Man Who Knew Too Much.

“It was THEIR desire to go back to square one, and then bring me in on this extremely expensive endeavor. This was extremely atypical corporate behavior. Once we began, they never once even suggested that we couldn’t do, or even re-do, what I felt needed to be done.

“From my perspective, I’ve been treated as a partner from close to day one when it came to what had to be accomplished, and the final work, as asset protection, 4k DCP, and downrezzed Blu-ray, are the proof of that pudding, in what was always a congenial, if occasionally frustrating, gestation period.

“Peter and his staff are really good people, very talented, and with a newly minted passion that begins with Peter, and execs above, to create a new atmosphere at the studio, where much of the work is performed internally, heavily controlled, and done not only right but, where budget allows, to perfection.

“I’m thrilled with the communal job that we’ve done, pleased with the credit afforded me, and can accept the documentary as a bit of corporate chest-thumping. It’s the final result that matters, and as you’ve seen, and you’ll forgive the phrase, we’ve nailed it.”

The final proof is in the pudding: when Spartacus ends and credits for the 2015 restoration begin to crawl upward, Harris’s name is the first one listed.