Now this is one fetching Cuban cover. It looks like dessert or afternoon sex. The hot red letters, Rihanna’s intense red hair, the chipped-paint wall of beige-tan with just a touch of mustard, the almost teal-green classic car, the faded green of her outfit…beautiful. I’ll be buying this new issue of Vanity Fair today or tomorrow, and I’ll plop it down on my aged wooden chest in front of my big blue couch, and if recent tradition is any guide I’ll probably never get around to reading it. I always buy it intending to read the whole thing front to back, but somehow I never do. 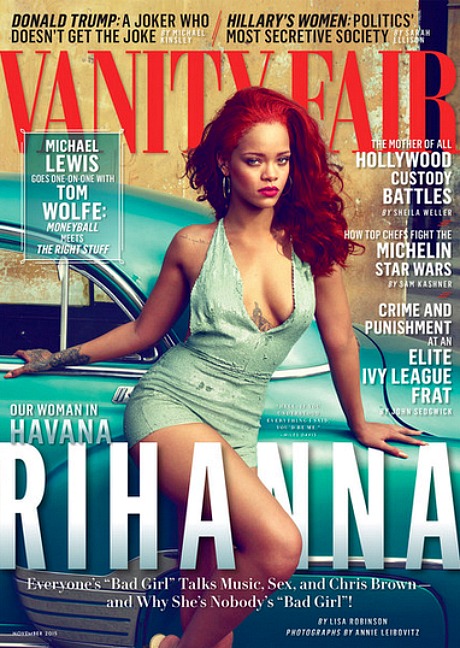 I’ve been buying Vanity Fair for 30 years now. I can’t precisely pinpoint when I stopped reading it, but sometime within the last couple of years. Mainly because I’m always checking twitter or writing when I sit down at home. I used to read Vanity Fair on coast-to-coast flights but now I spend all my time online, writing or researching column stories.

On top of which the articles have began to seem a little less substantial with more of an emphasis on girly, frothy, fashiony stuff.  Or people I can’t stand to look at.  I know that I hate the all-fashion issue. I’m not saying VF has become a kind of lah-lah magazine that celebrates (or tries to instill a fascination with) wealth and fashion and loaded people who are spending their money on increasingly peculiar or arcane things. But it feels like it’s kinda going in that direction.  More and more jaded crap.

I read the VF website a lot — a helluva lot more than the magazine, I can tell you. I’ve just been online and read Michael Lewis’ profile of Tom Wolfe, and that’s made me want to read another one that might be just as good. (But probably won’t be.) I just know that things aren’t the same. I know there’s a part of me that would like to stop buying the magazine altogether. Maybe that’ll happen someday.