A Little Stallone Action…Or Not?

There’s good buzz about Ryan Coogler‘s Creed (Warner Bros., 11.25), in which Sylvester Stallone‘s Rocky Balboa trains Michael B. Jordan‘s Adonis Johnson Creed (son of Apollo) for a big fight. A few others have heard the same talk. So why isn’t Warner Bros. screening it more liberally (i.e., for people like myself)? Hubba-hubba, guys. It opens in two and a half weeks.

Just today Deadline‘s Mike Fleming, one of the few journalists who’s seen it, said that he “wouldn’t be surprised if Sly Stallone’s subtle performance gets him nominated.” There was also a line in Josh Rottenberg’s 10.30 L.A. Times profile of Stallone that said Stallone’s “quietly soulful performance in Creed already has some Oscar pundits considering him as a potential supporting actor nominee.” 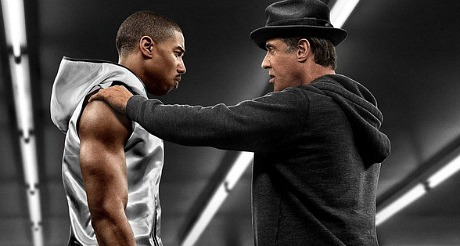 It’s understood that Creed is basically a good “audience movie.” Fleming called it “uplifting” and a movie that “dropped me right back into how I felt watching those first few [Rocky] films…[it] might rebirth a franchise.”

It sounds good enough to show at the currently unfolding AFI Fest, but it’s not on the slate. (There’s been talk about a possible sneak preview between now and the festival’s conclusion next Thursday night, and that the sneak could be Creed…but who knows?) You’d think that the buzz for the film + Stallone would have required the screening of a Creed trailer at yesterday’s Deadline Contenders event at the DGA and perhaps even a Stallone drop-by, but I’m told that didn’t happen either.

Warner Bros. has a reputation of favoring just one award-season film and gently elbowing the other fall-holiday releases aside. This year their preferred pony is Black Mass and particularly Johnny Depp‘s wig-and-shades performance as Whitey Bulger. It would appear that Creed is getting the short end of this strategy stick.

Similar deal with Ron Howard‘s In The Heart of The Sea, which was originally slated to open last March (3.13) until WB bumped it to 12.11. It looks like an exciting, CG-heavy. sea-monster flick that will appeal to Joe Popcorn, but no AFI Fest berth and no screenings thus far, or at least none I’m aware of. Which indicates some kind of cautious or measured appraisal of the film among WB marketers.