Maureen Dowd‘s 11.20 N.Y. Times Magazine piece about Hollywood boy’s-club sexism, which I finally got around to reading on today’s Miami-to-Los Angeles flight, is well written, heavily researched (Dowd interviewed and wrote for nearly six months) and very persuasive. It airs basic truths for the most part. As you might expect the piece re-emphasizes and summarizes the basic complaint about old-school dick attitudes making things difficult (in varying degrees) for women in the film and TV industry. Which of course is true. Ask any fair-minded woman who works in any professional capacity in this town…please. 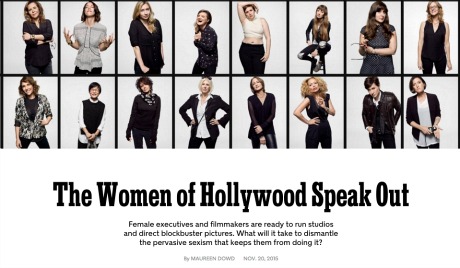 Dowd has spoken to over 30 female directors, producers and execs, and the gist, boiled down, is that women directors are (a) put through tough hoops and get treated a certain way, (b) can be thrown into movie jail for a single failure whereas male directors always seem to have a couple of “get out of jail” cards in their back pocket, (c) are regarded as not being as well suited to playing the role of the proverbial take-charge generalissimo on a movie set as guy directors seem to be, (d) are suspiciously regarded as theoretically or potentially indecisive or ditzy, (e) are indifferent or hostile to conventional male-gaze fantasies, and (f) aren’t nearly as favored as young baseball-cap-wearing directors like Colin Trevorrow (Jurassic World, Star Wars: Episode 9).

The best Dowd quote is from an interview she did two days ago (11.20) on CBS This Morning, to wit: “The amazing thing is, I’ve covered Saudi Arabia and I’ve covered the Catholic church, and in both cases these societies got warped. They got sick because they’re not using the brains…of women. And who knew that the same thing could happen in the most liberal town on earth?”

I could throw out minor nitpicks here and there, but there’s one blatantly false claim made about Elaine May‘s experience directing Ishtar that Dowd, I feel, should have at least qualified if not challenged. The quote comes from director Leslye Headland (Sleeping With Other People, Bachelorette), to wit: “‘These dudes, man. Spielberg and Cassavetes and Woody Allen have all made some unwatchable movies. But it’s Elaine May and Ishtar you remember. It’s not Elaine May’s fault. Poor Elaine.’”

Uhm, not correct. I know author Peter Biskind to some extent and regard him as a smart, savvy reporter who knows what goes, and according to his 2010 book “Star: How Warren Beatty Seduced America,” the failure of Ishtar was, to a significant extent, May’s fault.

Read this Vanity Fair condensation of Biskind’s account of what happened during the making of that 1987 disaster or consider the following excerpts pulled straight from his book:

(1) Pg. 329 — Early on Columbia chief Guy McElwaine was wary of the Ishtar project because boiled down it would be a collaboration between “three people who lived to argue” — May, Beatty and Dustin Hoffman. May had long been known as an “eccentric” director who, Biskind writes, “with the exception of Stanley Kubrick was the only director who shot as much film as Beatty.”

(2) Pg. 330 — McElwaine: “I spent a lot of time with Elaine, and she assured me she was not going to misbehave.” Biskind comments that “this was like asking Amy Winehouse to go into rehab.” When a dispute arose about the shape and focus of the film Hoffman “could see that May was proprietary and inflexible…she just wanted to shoot her script.” What Hoffman couldn’t see, Biskind remarks, “was that Beatty and Elaine were going to clash, and that Elaine was going to clash with [dp] Vittorio Storaro.”

(3) Pg. 349 — Production designer Paul Sylbert to Biskind: “With all the talk of dunes, May’s idea of the desert was Brighton Beach. Whenever she was faced with a decision and she didn’t know what to do, she would stall, and I could see she was stalling now.” May: “Who said anything about dunes? I want flat!” Sylbert “got the impression that May was afraid she was in over her head.”

(4) pg. 349 — Associate producer Nigel Wooll: “She would change her mind about anything — anything and everyrthing. Setups, locations, costumes. You’d ask her ‘black or white?’ and she’d say ‘yes!'”

(5) pg. 354 — According to Paul Sylbert, May said to him at one point, ‘Oh I’m making so many mistakes.’ I’d worked with her before and she didn’t want the world to know.

(6) pg. 355 — “Who said anything about battle scenes?” May said when it came to shoot one. On-set observer: “She couldn’t ask for help. She’s paranoid. She was locked up, stubborn. Like a black hole. Swallowed everything, nothing escaped.’

(9) Pg. 361 — Ultimately the Ishtar editors began with “2.6 million feet of film or 108 hours” or footage that end to end “lasted four and a half days. And sometimes May “didn’t show up for looping sessions” during post-production.

And yet Dowd let Headland get away with saying that the Ishtar catastrophe wasn’t May’s fault. This is more of a mild head-scratcher than anything else, but I’m asking myself why let that go? It indicates that Dowd wrote the piece from the perspective of a player for the team, and that she more or less decided from the get-go that she would adopt a supportive, non-challenging attitude.

Otherwise, as noted, the article seems like a reasonably fair, well-shaped argument for some changes that need to be made.