I sat down a couple of days ago with John McKenna, co-director of Steve McQueen: The Man & Le Mans, which I saw and greatly admired in Cannes six months ago, and with Chad McQueen, the late superstar’s actor-producer son. We did it in the Polo Lounge inside the Beverly Hills hotel, and sure enough a guy started playing piano halfway through the chat and half-ruined the recording. And Chad, who was late for the interview due, he said, to having enjoyed a little too much liquid cheer after the doc’s premiere the night before, was entirely amiable and loose-shoe but also seemed a tiny bit…uhm, baked. 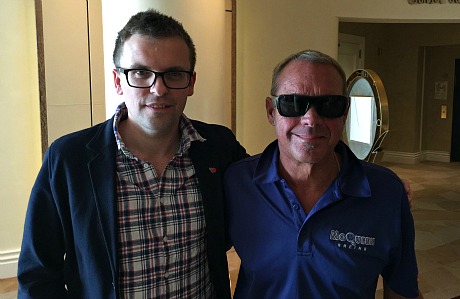 But it was thrilling to commune with the son of one my all-time heroes and to throw out a few thoughts and asides…whatever came to mind. Chad’s eyes are covered by dark shades, but he seems to have inherited a few of his dad’s physical traits, including his hair, jawline and manner of speech. Plus he has that watchful thing, that vibe…a chip off the old McQueen undercurrent.

I was silently saying to myself, “What a hallowed California moment…chilling in the Polo Lounge and talking about Steve McQueen with his only living son and shooting the shit about this and that and Junior Bonner“…yeah.

Here’s an mp3 of our discussion, such as it was.

I learned two interesting things: (a) While I had no issues with the 112-minute running time when I saw the doc in Cannes (unlike, say, The Hollywood Reporter‘s Todd McCarthy, who suggested a trimming), the film is now down to 102 minutes, which naturally makes me want to see it again; and (b) McKenna said that McQueen wanted to do his own driving and actually compete in the real-deal 24 Hours at Le Mans race in the summer of ’70, which is when the film was shot.  But studio insurers said no. This turndown, McKenna suspects or believes, created frustration in McQueen and perhaps a bit of anger that may have contributed to the disarray during production.

Yesterday N.Y. Times critic Neil Genzlinger described the doc as “a cautionary tale about Hollywood and the swelled-head syndrome.” It’s about a lot more than that, trust me.

Steve McQueen: The Man & Le Mans (FilmRise, 11.12) is “a fascinating time trip but mostly a sad, bittersweet mood piece about failure and a movie star swallowing his own tail,” I wrote a few weeks ago. “Clarke and McKenna have certainly made something that’s heads and shoulders above what you usually get from this kind of inside-Hollywood documentary. Heretofore unshared insight, a lamenting tone, an emotional arc. Plus loads of never-seen-before footage (behind-the-camera stuff, unused outtakes) plus first-hand recollections and audio recordings. A trove.

“Steve McQueen: The Man & Le Mans may seem at first glance like a standard nostalgia piece about the making of McQueen’s 1971 race-car pic, which flopped critically and commercially. (I own the Bluray but have barely watched it — the racing footage is authentic but the movie underwhelms.) Yes, in some ways the doc feels like one of those DVD/Bluray ‘making of’ supplements, but it soon becomes evident that Clarke and McKenna are up to something more ambitious.

“What their film is about, in fact, is the deflating of McQueen the ’60s superstar — about the spiritual drainage caused by the argumentative, chaotic shoot during the summer and early fall of ’70, and by McQueen’s stubborn determination to make a classic race-car movie that didn’t resort to the usual Hollywood tropes, and how this creative tunnel-vision led to the rupturing of relationships both personal (his wife Neile) and professional (McQueen’s producing partner Robert Relyea, director John Sturges), and how McQueen was never quite the same zeitgeist-defining hotshot in its wake. He wanted to control his destiny, become a major producer as well as a star…and the experience on Le Mans ended that dream.

“Racing is life. Anything that happens before or after is just waiting.” — Steve McQueen.

“He wasn’t a Hollywood storyteller in the traditional sense. He wasn’t a director. He hadn’t gone through that education. He fought his way into that world and he fought his way to the top. And that power allowed him to try and do what he wanted to do and maybe he didn’t have the skill-set to get it on paper, to get it down there, to put on paper what was in his head.”