From A.O. Scott‘s 11.3 N.Y. Times review of John Crowley & Nick Hornby‘s Brooklyn: “When a family emergency summons Eilis back to Ireland, Brooklyn discovers its plot and reveals the stakes of its heroine’s story. And heroic she is, even though her drama is firmly anchored in the mundane. At home, she finds familiar comforts and also a new suitor, a local boy grown into handsome Domhnall Gleeson. 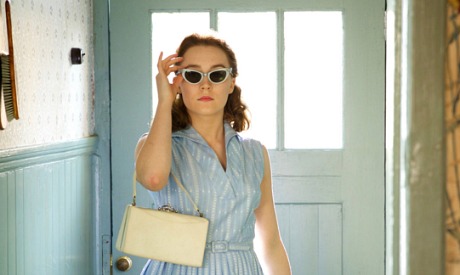 “Eilis’s romantic predicament is agonizing, for her and also for the viewer. I can’t remember the last time I cared so much about the marital prospects of a fictional character, and I don’t think that’s just because it’s in my nature to root for a guy named Tony against a skinny redhead.

“The real reason is Ms. Ronan, who has grown from an uncannily intelligent child actor into a screen performer of remarkable force and sensitivity. On the page, Eilis comes alive through the fineness of Mr. Toibin’s prose. A devotee of Henry James, he registers the fluctuations of the character’s inner weather with meteorological precision. Inwardness is a great challenge for filmmakers. The human face is a wall as well as a window. Words lose their power. Everything depends on the ability of actors to communicate nuances of feeling and fluctuations of consciousness.

“And Ms. Ronan uses everything — her posture, her eyebrows, her breath, her teeth, her pores — to convey a process of change that is both seismic and subtle. Eilis is in transit, and to some degree in limbo, caught between two stages of life and two very different conceptions of home. By the end of Brooklyn she is no longer who she was, even as she seems like someone we have always known.”