“If Spotlight feels dogged in its procedure, then why does it exert such command? Because, I think, [director Tom] McCarthy is tackling something more basic than paranoia — namely, pride of place, and the way in which it offers both an embrace and a choke hold. ‘Born and raised,’ Walter Robinson says, when asked if he’s from Boston, and the same rings true, throughout the film, for the hunter and the hunted: for the Spotlight squad, for the fund-raisers at a charity gala, and for the authorities at Robinson’s old high school (across the street from the Globe), who harbored an abusive cleric in their midst. And what of the paper’s subscribers, who are fifty-three per cent Catholic? Will they be willing to read of rot in the foundations? 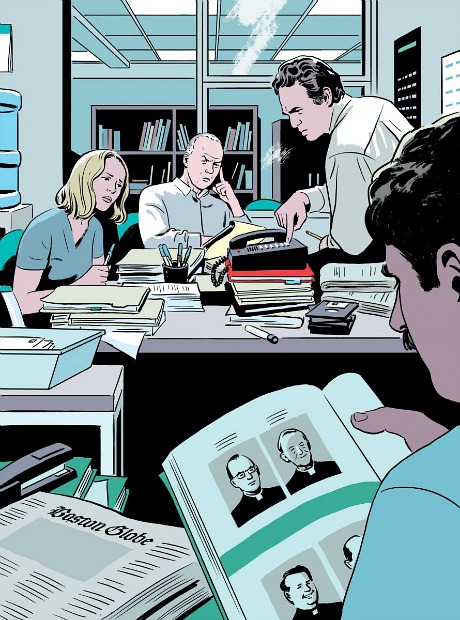 “Paul Guilfoyle has a wonderful turn as a Bostonian grandee, confident that any unpleasantness can be smoothed away with a hand on the shoulder and a quiet drink. He’s not a monster, or a hypocrite; he’s a decent sort, oiling the wheels of society. To stop them turning, in the interests of justice, takes not only guts but imagination.

“That is why Marty Baron, of all people — shy, taut, and humorless, in Liev Schreiber’s clever portrayal — struck me as the hero of the hour. He is mocked for being, as one insider labels him, ‘an unmarried man of the Jewish faith who hates baseball,’ but it is precisely his status as an outsider that allows him to initiate the quest. Folks in the Church, and elsewhere in the city, know what went on, yet they don’t really want to know. It’s all too close to home. Baron wants to know.” — from an 11.9 review by New Yorker critic Anthony Lane.