Where To Invade Next Fact Sheet — Hold Onto This

The following obviously can’t come together if you haven’t seen the film, but here are the questions I asked and the answers as provided by Werner:

HE question #1: How typical is that gentle prison Moore showed in…where is it, Norway or wherever? Are there hardcore prisons also in that country? Is this an experimental or a routine thing? Sez who? What sources?

Answer: There are two prisons shown in the film, both of them in Norway. One is on an island, and the other is the maximum security Halden prison.

“According to a New York Times story earlier this year: “Norway banned capital punishment for civilians in 1902, and life sentences were abolished in 1981. But Norwegian prisons operated much like their American counterparts until 1998. That was the year Norway’s Ministry of Justice reassessed the Correctional Service’s goals and methods, putting the explicit focus on rehabilitating prisoners through education, job training and therapy. A second wave of change in 2007 made a priority of reintegration, with a special emphasis on helping inmates find housing and work with a steady income before they are even released. Halden was the first prison built after this overhaul, and so rehabilitation became the underpinning of its design process. Every aspect of the facility was designed to ease psychological pressures, mitigate conflict and minimize interpersonal friction. Hence the blueberry forest.”

HE question #2: The tax comparison portion, which is very brief, is based upon what figures, and from what sources? Two piles of coins are used as symbols in the films — they stand for what percentage exactly of average employee income in the U.S. and various European countries? Moore says that when you add in all the other stuff we have to pay for that the U.S. or local governments don’t provide but which various European governments, local and national, do provide…he’s saying that in effect that we ‘pay’ much higher taxes even though we don’t call them ‘taxes.’ Where are specific numbers & charts that back this up? This is central to the whole film.

Answer: These numbers were provided to us by The Organization for Economic Co-operation and Development (OECD). It is based on the percentage that the average working American pays in income taxes and social security taxes vs. the average French. 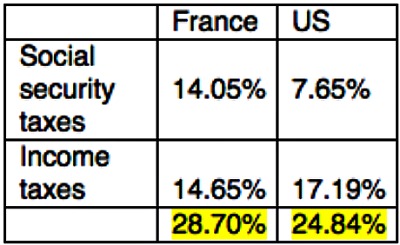 Please find attached the time series of average PIT for the US and France from 2000 to 2014. The figures have been extracted from the online OECD statistical portal: http://dotstat.oecd.org/Index.aspx?DataSetCode=AWCOMP.

Please find also attached the related time series for social security contributions that have been extracted from the OECD statistical portal: http://stats.oecd.org/Index.aspx?DataSetCode=AWCOMP.

HE question #3: How typical are the benefits of the workers in the Ducati plant in Italy? And the other plant…whatever it was. Does each and every worker get…what is it, five or six weeks of vacation? Plus paid maternal leave? Moore acknowledges that Italy’s economy is problematic. To what extent (if at all) are liberal worker benefits part of the reason why the country is in financial disarray?

Answer: “In Italy, maternity leave is compulsory for female workers, from two months before until three months after childbirth. Pre childbirth leave can start at an earlier date than two months, if the worker’s work is dangerous for her health or that of the unborn child. On the other hand it is possible to postpone pre-childbirth leave in order to increase the leave granted after childbirt. During compulsory maternity leave, the mother is entitled to 80% of her regular pay from Social Security and the period is counted as actual work time. Collective agreements usually oblige the employer to make up the difference to the regular wage.” Source: http://www.ilo.org/ifpdial/information-resources/national-labour-law-profiles/WCMS_158903/lang–en/index.htm

“Italian workers have at least 30 to 35 days paid holiday mandated each year.

“Workers in Italy are entitled to the EU mandated four weeks of vacation, equal to 20 vacation days, each year. In addition, Italy has 12 national paid holidays. Workers receive extra pay even when these holidays are not on workdays.” Source: http://www.ilo.org/ifpdial/information-resources/national-labour-law-profiles/WCMS_158903/lang–en/index.htm

“When Italians get married they get 15 days paid holiday.

“For his/her wedding a worker usually has the right to 15 days of paid leave.” Source: http://www.ilo.org/ifpdial/information-resources/national-labour-law-profiles/WCMS_158903/lang–en/index.htm

“In December, Italian workers get an additional salary.

“Italy: In December, employees are paid a Christmas bonus equal to a month’s salary. In many contracts a 14th month’s salary is included and is paid in June.” Source: http://internationalhrforum.com/2010/01/06/base-salary-not-so-basic/

“According to case law, holidays that have not been enjoyed cannot be forfeited and they are automatically carried forward in the following year(s).” Source:
http://www.lexology.com/library/detail.aspx?g=cb461a04-c689-4117-b144-fa82e9eb06d5

Regarding Italy’s problematic economy: “The Italian economy suffered from the global financial crisis, triggered by deregulation of the banks in the U.S.”

HE question #4: The drug laws in Portugal are universally applied? They kicked in when exactly? Have any other countries decided to decriminalize drug use or dealing?

Answer: “In 2001, Portugal eliminated criminal penalties for drug users. Since then, those caught with small amounts of marijuana, cocaine or heroin go unindicted and possession is a misdemeanor on par with illegal parking.” Source: http://www.spiegel.de/international/europe/evaluating-drug-decriminalization-in-portugal-12-years-later-a-891060.html

“Since Portugal decriminalized drug use, both the number of drug users and the amount of drug-related crime has gone down.

“In most respects, the law seems to have worked: serious drug use is down significantly, particularly among young people; the burden on the criminal-justice system has eased; the number of people seeking treatment has grown; and the rates of drug-related deaths and cases of infectious diseases have fallen.” Source: http://www.newyorker.com/magazine/2011/10/17/getting-a-fix

“‘There is no doubt that the phenomenon of addiction is in decline in Portugal,’ said Joao Goulao, President of the Institute of Drugs and Drugs Addiction, a press conference to mark the 10th anniversary of the law. The number of addicts considered ‘problematic’ — those who repeatedly use ‘hard’ drugs and intravenous users — had fallen by half since the early 1990s, when the figure was estimated at around 100,000 people, Goulao said.” Source:
http://www.forbes.com/sites/erikkain/2011/07/05/ten-years-after-decriminalization-drug-abuse-down-by-half-in-portugal/

HE question #5: Any kid can go to Slovenia and get a free education? Where is the logic in that from Slovenia’s standpoint? Why would they offer this? There must be some qualifiers, some bureaucratic requirements, some hurdles to clear.

“Studying as a full-time undergraduate at one of Slovenia’s universities is free, and student status brings numerous other benefits. Students enjoy heavily subsidised food in a wide range of restaurants, discounts on public transport, reduced admission to many events and discounts on participation in various courses and activities.

“The University Chancellor in Slovenia explained to Michael on camera: “every individual who is able to develop his capacities should go to the University and if there is economic problem in his family, then the state should enable his study. And that’s why public education is so important.”

HE question #6: The “U.S. prison labor continues slavery” thing is pretty great. What are the sources, reports, books, data, etc.?

Two HE questions that weren’t answered:

Why doesn’t the film even briefly acknowledge Bernie Sanders’ championing of democratic socialism in Norway, Sweden and Finland? This is precisely what this film is saying, and Sanders has been saying the same thing on the stump, and the film ignores this?

The nod to Hillary is clear enough in the Iceland section and that’s cool, but why does Moore totally ignore Sanders? I asked him about the Bernie thing in Toronto and he just chucked and said, ‘Oh, yeah…well, I guess so’ or something like that.