I did a 20-minute phoner yesterday afternoon with Revenant director Alejandro G. Inarritu. No mention of the “bear rape” thing as I was determined to keep things on a higher plane. We covered several areas. Toward the end I asked if he was going to appeal the recent disqualification of Ryuichi Sakamoto‘s score for Oscar consideration by the Academy’s music branch. Inarritu confirmed this. Here’s an explanation of his somewhat non-traditional approach to the score, which, as I understand it, was to use Bryce Dessner and Alva Noto‘s electronic music for subliminal atmospheric mood sprinklings while Sakamoto’s orchestral score delivered the heart-and-soul current. (Or something like that.) Again, the mp3. 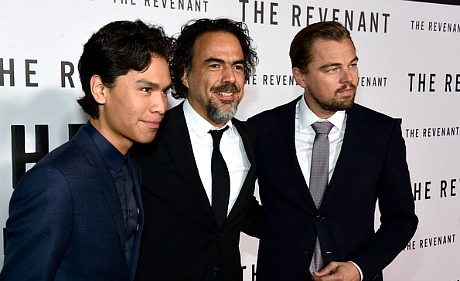 Notes/questions I’d written before speaking with Inarritu: “As long as your heart is beating, as long as you’re able to breathe, you fight to the last.

“Respecting the difference between Emmanuelle Lubezski‘s Alexa 65 photography (which constitutes just under half of The Revenant‘s footage) and Robert Richardson‘s Super Panavision 80 photography for The Hateful Eight.

“How many pelts would be found on such an expedition, and how much money would each trapper get? Why winter? Why not go out in search of pelts in the spring and summer? The horse, I presume, was manufactured, along with the intestines and stomach and liver and whatnot. Did Leo wear a wetsuit under his trapper clothing?

“I don’t know that The Revenant delivers a theme that echoes my own life except in terms of the necessity of strength and persistence throughout all the difficult episodes. What I know and believe is that this is a film that has taken me where I’ve never been, and in a much more realistic and enveloping way. The Argentina portion was the final Leo & Domhnall Gleeson vs. Tom Hardy battle. That magnificent promotional book — whose idea? How long did it take? Those imitation daguerrotypes are perfect.

It’s a shame this wasn’t done quite right — no music, no high-impact CAROL beginning, the crawl starting at least 10 or 12 seconds late. If anyone has access to the original, please forward. Hilarious sidenote: Rooney Mara‘s Therese Belevet character renamed “Therese Bela Fett.”

An early teaser for Star Wars: The Force Awakens began with an older woman’s voice asking “who are you?” and Rey (Daisy Ridley) answering “I’m no one.” Correct me if I’m wrong but this dialogue isn’t heard in the actual film…right? Sidenote: Here‘s Carmen Tse’s LAist story (posted yesterday afternoon) about the Arclight digital meltdown freakout.