Support on Patreon Follow @wellshwood
79 Comments
A Calm, Respectful Pushback Against The Inevitability of Mark Rylance

I would never push a case against Mark Rylance‘s Bridge of Spies performance as 1950s Russian spy Rudolph Abel. Nor would I dispute the general conviction that he’s an all-but-certain Best Supporting Actor nominee. Like everyone else, I knew right away he’d be nominated when I first saw Steven Spielberg‘s reasonably decent espionage film last month. What bothers me is the slamdunk blogaroonie belief that Rylance has it all but won. I like him too as far as it goes.  I just don’t get how he became the absolute #1 love child.

Actually, I do know how this happened. Rylance is a respected, Tony-winning theatre actor, which supplies the usual distinctive air. Being older and especially British also counts for a lot among SAG members and their vague inferiority complexes. And somewhere early on Rylance just became this bowling ball that started knocking pins over left and right. Some of this, trust me, was group-think, follow-the-leader, monkey-imitation reflex stuff. Too many critics and blogaroonies seemed to just feel the rhythm and started saying the same thing over and over — “Rylance for sure, Rylance for sure,” etc.

As of we now stand six big-city critics groups have given him a Best Supporting Actor trophy (including New York, Los Angeles and Toronto).

I have no real argument against this, but on the other hand I’ve been thinking “okay but was he really that good? If he wins, he wins…fine, but does it have to be a Rylance rout?”

And then during an aborted Oscar Poker recording earlier today (I was in Brooklyn and feeling too hoarse and woozy and cranky to go on) Awards Watch‘s Erik Anderson said a noteworthy thing. He said he’d only recently seen Bridge of Spies and that he didn’t get what all the Rylance fuss was about. He thought that Rylance didn’t “do” all that much and some of his performance was actually underwhelming.

“An era of liberal dominance doesn’t mean that the ideological differences between Democrats and Republicans disappear. It means that on the ideological playing field, the 50-yard line shifts further left. It means the next Republican president won’t be able to return the nation to the pre-Obama era.

“That’s what happened when Dwight Eisenhower followed Franklin D. Roosevelt and Harry Truman. Ike moderated the growth in government expansion that had begun in the 1930s, but he didn’t return American politics to the 1920s, when the GOP opposed any federal welfare state at all. He in essence ratified the New Deal.

“It’s also what happened when Bill Clinton followed Ronald Reagan and George H. W. Bush. By passing punitive anticrime laws, repealing restrictions on banks, signing NAFTA, cutting government spending to balance the budget, reforming welfare, and declaring that the ‘era of big government is over,’ Clinton acknowledged that even a Democratic president could not revive the full-throated liberalism of the 1960s and ’70s. He ratified Reaganism.

I wanted to see Star Wars: The Force Awakens a second time following the 12.14 premiere; I wanted to see if my initial positive reaction would hold. I saw it again the following night, and it pretty much did. But it’s not really a grower — i.e., one of those films that take root and yield deeper and richer satisfactions days, weeks or months later. Due respect but enjoyable as it is, SW: TFA is pretty much a one or two-timer. (The Revenant is a grower — I’ve watched it four times now.)

Which is why I was surprised by a 12.27 THR piece by Pamela McClintock that said “repeat viewers…are playing an increased role playing an increased role in the movie’s record-shattering run as the audience broadens out.” Disney distribution president Dave Hollis tells her that “you can’t do these kind of numbers without extraordinary repeat business…we know anecdotally people are seeing it three and four times.”

18 Comments
Gurus Need A Few Weeks To Catch On 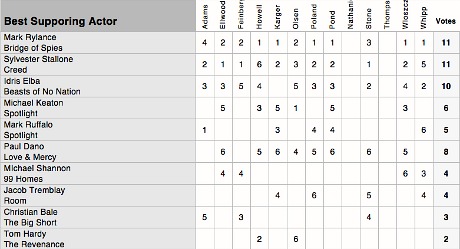 The flinty, straight-talking Haskell Wexler, one of the greatest and most influential cinematographers of the 20th Century, has left the earth at age 93. Hats off, head bowed. Wexler’s career lasted about 55 years, beginning with the 1960 documentary The Savage Eye to John Sayles‘ Silver City in’04. He enjoyed a peak period of about 15 years (’63 to ’78) when he shot Eliza Kazan‘s America, America (’63), Franklin Schaffner‘s The Best Man, Mike Nichols‘ Who’s Afraid of Virginia Woolf?, Norman Jewison‘s In the Heat of the Night and The Thomas Crown Affair. After directing the respected Medium Cool (’69) Wexler served as “visual consultant” on George Lucas‘s American Graffiti and then pushed on with Milos Forman‘s One Flew Over the Cuckoo’s Nest (which he was fired off after shooting about 87% over some muddled FBI-related concern), Hal Ashby‘s Bound for Glory and Coming Home. Wexler also completed the work of dp Nestor Alemendros on Terrence Malick‘s Days of Heaven. I interviewed Wexler during Sundance ’06 about his documentary Who Needs Sleep?, and it was during that discussion that he woke me to the fact that it’s pointless to work more than 14 hours a day, that your focus after that point isn’t worth anything. Haskell was a tough old bird, a real Type-A personality.