Bryan Singer‘s X-Men: Apocalypse (5.16.16) is first and foremost about everyone cashing big checks and investing wisely and buying second homes — Singer, the cast, the producers, 20th Century Fox. Everyone wants to live in Fat City. It’s secondarily about Apocalypse, the most malicious and malignant of mutants who awakes after hibernating for eons, is instantly pissed at the world he finds and “recruits a team of powerful mutants to cleanse humanity and create a new world order,” blah blah. You’d never know it but the bull-necked Apocalypse is played by Oscar Isaac. My first thought when I watched this trailer was “hey, Apocalypse looks like that big, bald, white-skinned Mr. Clean guy in Ridley Scott‘s Prometheus.” Right? 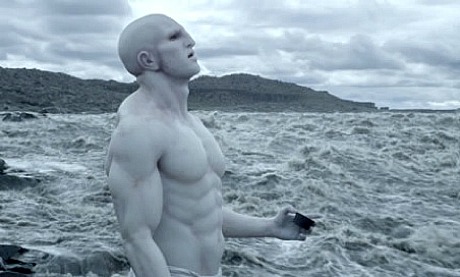