After the 11.28 Joy screening on the Fox Lot I posted some generally admiring tweets. Good as it is Joy is a little something of a mixed bag, and so I was struggling with my responses. It works but in a scattered, neurotic, off-and-on way. In my head I was giving it a grade of around 84 or 85, which is a B. Good, tasty, sharp, focused and very David O. Russell-y, but not on the level of Silver Linings Playbook and The Fighter. Then I saw it again and it didn’t play quite as well, and so I downgraded it to about a 77 or 78. Joy is nonethless a very well made, grade-A film that works in fits and starts, and Jennifer Lawrence‘s performance is unquestionably strong and redeeming…so that’s where it is for me. It’s a thumbs-upper but not way up. Which I why I was shocked by Joy‘s aggregate ratings on Rotten Tomatoes and Metacritic — 53% and 63% respectively. That’s an average of about 58%, and by a high-school grading system that’s a serious flunk. Joy is too expertly made to rate that. It absolutely deserves a general pass. And don’t forget that Robbie Collin Telegraph rave. 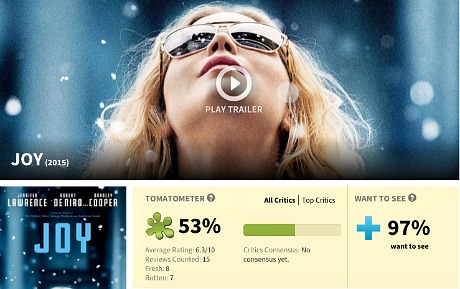 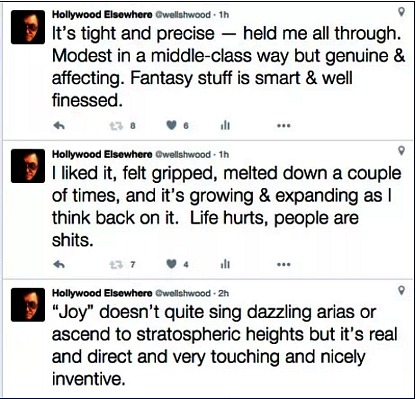