“Because They Hate The Movie, Michael”

I recently wrote of my admiration for Terry Cline‘s I Believe in America, a screenplay about the making of The Godfather. A day or two later a guy suggested that a script based on Steven Bach‘s “Final Cut: Dreams and Disaster in the Making of Heaven’s Gate” might be an even more compelling read. A sprawling, dialogue-driven, slow-motion calamity flick, set mostly in Hollywood and New York with occasional detours to the shooting set with fascinating, whip-smart dialogue and one of the most unusual villains of all time — director Michael Cimino. The instant I heard this my brain spun around, clicked its heels and said “yes!” 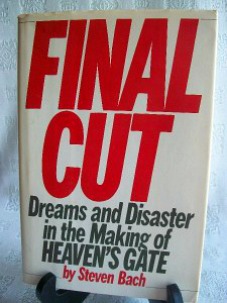 This could be a brilliant six-episode HBO or Netflix series, I’m thinking. Or a ten-episoder…whatever. Not long after posting about the Godfather script I was informed by a producer friend what a complete friggin’ nightmare it can be to produce films about the making of this or that classic film/play/anything if any of the principals are alive. I don’t know if getting the rights to Bach’s book (which of course was legally cleared when it was published 30 years ago) would lessen difficulties or not, but I’m dead certain that the entire world would stop whatever it’s doing to watch a miniseries about this catastrophic Hollywood saga. I got so high on the idea that I ordered a paperback version of Bach’s book — I haven’t read it in over three decades.

Here’s my “Don’t Buy The Bullshit” piece about the 2012 Heaven’s Gate tribute at the Venice Film Festival, and an adjacent piece called “To All The Heaven’s Gate Revisionists.” Here’s F.X. Feeney‘s retort to both articles. And here’s Steven Soderbergh‘s re-cutting of Michael Cimino‘s film — “Heaven’s Gate: The Butcher’s Cut.”