I’ve been way, way behind on Matthew Heineman‘s Cartel Land, a doc that’s mostly about Mexican vigilante militias (i.e. “Autodefensas“) fighting the Knights Templar drug cartel in the Michoacan region. It focuses in particular on Dr. Jose Mireles, a Michoacan-based physician who began leading the Autodefensas in 2013 after being kidnapped by the cartel and “several” family members having been murdered by same. (The doc also profiles the less interesting Tim “Nailer” Foley, leader of Arizona Border Recon.)

In any event I finally caught Cartel Land last night at a private screening in Tribeca. Totally riveting, grade-A, deserves to be nominated. My first thought was that it could easily be adapted into a compelling narrative feature. Mireles is a genuinely heroic, charismatic fellow — a kind of silver fox Emiliano Zapata with a yen for the ladies. I’m told that director Kathryn Bigelow (Zero Dark Thirty, The Hurt Locker) “likes” the notion of a dramatic adaptation. 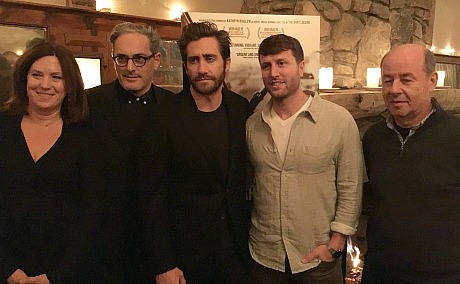 Cartel Land debuted at Sundance 2015, was acquired by The Orchard last February, opened last July to a 92% Rotten Tomatoes rating, and was recently named as one of the 15 short-listed docs for a possible Oscar nomination for Best Documentary Feature.

The Cartel Land after-party happened at Locanda Verde. Jake Gyllenhaal fell by; ditto Black Mass director Scott Cooper. Gyllenhaal has finished Tom Ford‘s Nocturnal Animals, he told me, and is now starring in David Gordon Green‘s Stronger, a Boston marathon bombing film in which he plays Jeff Bauman, a survivor who lost both his legs.

Thanks to Ryan Werner for inviting me.