Two days ago I did a 20-minute sitdown with Hateful Eight director-writer Quentin Tarantino at the Four Seasons. Just a mild little lunch chat. I’d decided in the wake of Saturday’s Kurt Russell contretemps (his, not mine) to not voice any criticism and just cruise along as it were. If you want to characterize my end of the conversation as “obsequious” or “ass-kissing,” go right ahead. But when you’re sitting down to lunch you don’t want to start any shit. Life is good, enjoy the vibe. 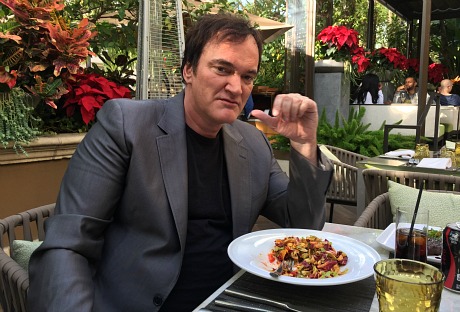 We talked about Quentin’s New Beverly and particularly his love for 35mm viewing vs. my concerns about same. I mentioned how Pete Hammond told me that a recently screened print of The Bravados was totally spotless, and Quentin mentioned how he’s been getting mint-condition archival prints. Quentin says he’s down with 35m even when prints have a certain degree of wear and tear (scratches, skips, dirt marks) because, he feels, old prints carry a certain residue of all the performances they’ve given, and therefore a residue of all the emotions they generated.

He also mentioned that the New Beverly will be showing Man in The Wilderness, a lower-budgeted 1971 version of The Revenant with Richard Harris as Leonardo DiCaprio, on December 9th and 10th.

I mentioned the vague kinship I feel over Tarantino having admitted to not paying parking tickets when he was young and poor, as I’ve also done.

No, I didn’t mention the general consensus that while Robert Richardson‘s Ultra Panavision 70 cinematography, largely confined to the shadowy interiors of Minnie’s Haberdashery, is handsome and alluring as far as it goes, it really doesn’t compare to Emmanuel Lubezski‘s glorious Revenant visuals, and I also didn’t mention my feeling that Ryuichi Sakamoto‘s Revenant score kicks the shit out of of Ennio Morricone‘s music for The Hateful Eight. Why be contentious? Another time and place.

My favorite part of the conversation happened with I mentioned a notion I had when writing about Death Proof back in ’07, which was that Kurt Russell‘s Stuntman Mike could have, in a different realm, become Hickey in a Tarantino version of The Iceman Cometh. Tarantino said he felt the same kind of current, the same sense of possibility when he was writing Death Proof/Grindhouse. But of course, he had to stick to the basic B-movie payoff concept, the lapdance thing, the hairy car chase, etc.

Here’s how I put it eight years ago: “I love, love, love the Stuntman Mike dialogue in the barroom in the first half of this thing. Truly, there is something amazing brewing inside Kurt Russell as he peels off line after line in that slow-hand, seductive drawl of his. I said last April that Tarantino should have made a kind of Iceman Cometh out of this character and this setting — it could have been talk-talk-talk for two or even three hours and I, for one, would have eaten it all up. For the first time in his life Tarantino could have delved and dug in. He could have followed his feelings and beliefs and lamentations and just gone for broke. He could have riffed and probed and wondered about every last thing under the sun, and I would have relished it. (Probably.)”