The other day renowned critic, author and filmmaker F.X. Feeney and I spent a half-hour discussing Alejandro G. Inarritu‘s The Revenant — here’s the mp3. 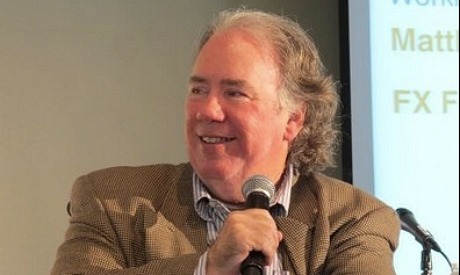 Here’s a short Feeney piece about the film: “A man left for dead rises and, against every possible obstacle, seeks vengeance against those who not only abandoned him but murdered someone he loves. This is the plot of The Revenant. It has a classical familiarity. John Boorman’s 1968 crime drama Point Blank follows this outline, as does Man in the Wilderness, a 1971 western which starred Richard Harris and John Huston and was coincidentally based on the same historic incident – but all prior variations on such themes disappear as this film unfolds.

“One doesn’t ‘watch’ The Revenant so much as live it. If this movie becomes a smash hit, it will be because survival — pure and simple — has become such an across the board concern in so many of our imaginations, especially as the world degenerates daily into an ever more senseless shoot ‘em up. Director Alejandro G. Iñárritu gives actors Leonardo DiCaprio and Tom Hardy ample time and space to act out this primal duel.

“For most of their two and a half hours onscreen these men and their surrounding ensemble operate without words. Every breath, every stark choice is magnified by surrounding vastness. Winds howl and footsteps crunch but words are not sufficient weapons or even tools to cope with such an environment, despite that, as needs arise, the screenplay by Mark L. Smith (from the novel by Michael Punke) holds to the raw elegance of American English as spoken in the frontier.

“The feeling is akin to the novels of Cormac McCarthy. With two veteran partners of Terrence Malick — production designer Jack Fisk and cinematographer Emmanuel Lubezki — Inarritu communicates a physically cruel universe, filled with a wealth of visual and tactile poetry, in which thinking men reduce one another to savagery in the same instant a sheer rage to live forces them to surpass themselves.

“Hardy’s treacherous character is accorded the most interesting speech in the picture – and this figures. As the one who set DiCaprio on his warpath, he’s the guy with the most to justify, to himself more than anybody listening. His nervous energy hints at a moral point that, against nature’s backdrop, words mostly deceive. That his motives for double-dealing are persuasive all the same is part of the great fun.

“There are no villains in these wilds. Everybody has their reasons. ‘Survival’ is a pure, honorable motive. That Hardy’s character preaches a shameless gospel of ‘me-first’ makes him deeply relatable, hate him or not. Nature will forgive us if we cheat other people to survive, but other people can not, indeed must not.

“DiCaprio’s hero certainly must not forgive: not if he is to fight his way out of the grave and be true to himself as well as those he loves; not if he is to more deeply survive, as a spirit and a being. That is the moral resonance of The Revenant, and it lives on in the days and weeks after one has seen it.”