Hulu’s 11.22.63 will begin streaming on 2.15.16, but does that mean the whole thing will be available, House of Cards-style? It was recently announced that the two-hour opener, directed by Kevin McDonald, will debut at Sundance ’16. Star James Franco and costars Sarah Gadon, Daniel Webber, George MacKay, Josh Duhamel and Chris Cooper will sit for a post-screening q & a. 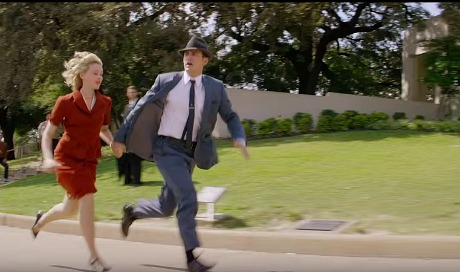 James Franco, Sarah Gadon during a grassy knoll sequence from 11.22.63.

The song on the trailer is Bobby Vinton‘s Over and Over, “a B-side from 1962 so rare it’s never been digitized or even issued on CD or cassette before,” according to Hulu. “The master recording was unarchived and digitized by Sony records specifically for this trailer.”

From an 11.22.13 HE post: “I visited Dallas in the late ’90s. I went right over to Dealey Plaza, of course, and stood behind the picket fence atop the grassy knoll, which is where the second shooter could have fired from. (There had to be some reason why those cops ran up the knoll with their guns drawn after JFK’s limo sped off.) The first thing I noticed was that the fence was old and weathered and that some of the slats were missing. Maybe things have changed since but I naturally wondered why Dallas authorities hadn’t maintained the fence as it looked on 11.22.63.

“On one hand the spruced-up Sixth-Floor Museum at Dealey Plaza is a big tourist attraction; on the other they’re content to let the grassy-knoll fence fall to pieces. Obviously a conflicted mentality.” 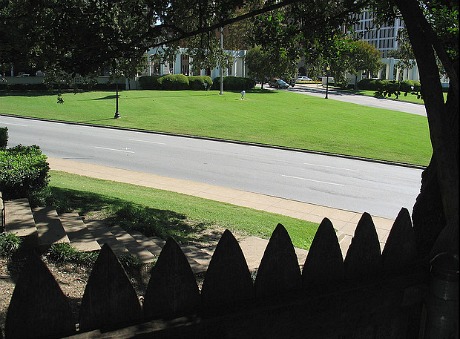 December 18, 2015by Jeffrey Wells13 Comments
« Previous post
Put A Cap On It
Next post »
Is Saul Locked?