The word around the campfire is that the Weinstein Co. gradually began to realize that The Hateful Eight is being processed by screening invitees as a kind of black comedy. I’m told the Weinsteiners wanted the Golden Globers to re-classify it as a comedy/musical but the effort didn’t succeed. The Hateful Eight isn’t my idea of a comedy. There isn’t much difference in Hateful‘s tone and attitude and that of Reservoir Dogs, Inglorious Basterds and Death Proof, and I’ve never heard them described as comedic. Hateful delivers the same old par-for-the-course Tarantino verbal swagger, loquacious and arch and yaddah-yaddah. Yes, a certain meta-humorous attitude is part of that but you can’t hoist up your britches and announce a re-definition of the term “comedy” because it suits your purpose to do so. Well, you can but not if people don’t go along with it. 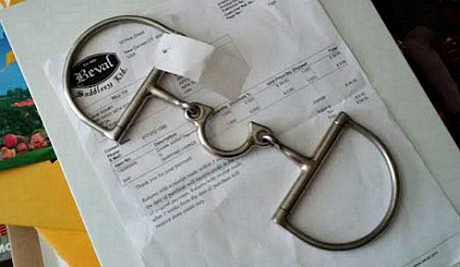 Hateful Eight stirrup or handcuff swag, or misidentified as same?

By the way: Given that The Hateful Eight and The Revenant are a pair of high-style, ultra-violent wintry westerns opening against each on 12.25, you’d think that either 20th Century Fox or the Weinstein Co. would shift the release date of one or the other. But it won’t happen. The general presumption seems to be that the Tarantino will perform better than the Inarritu. The Tarantino brand is widely known and accepted as a swaggering, colloquial people-friendly thing and that the Inarritu brand is about ravishing images and solemn heavy-osity, which never has been and never will be a Joe Popcorn-type deal.