A growing consensus appears to be saying that more than just a few isolated problems have plagued the Ultra Panavision 70 roadshow presentations of Quentin Tarantino‘s The Hateful Eight. If anyone has any first-hand reports, please post them — but the word thus far has made the situation fairly clear. Private industry venues are one thing, but a significant percentage of commercial cinemas clearly weren’t up to the task. And this is no mark against Boston Light and Sound‘s Chapin Cutler, who was hired by the Weinstein Co. to make sure that the Ultra Panavision 70 showings went smoothly. There is no finer or more knowledgable projection technician in the world than Cutler, but he was facing an insurmountable situation. The technology wheel has turned, and there was only so much Cutler could do to remedy that. 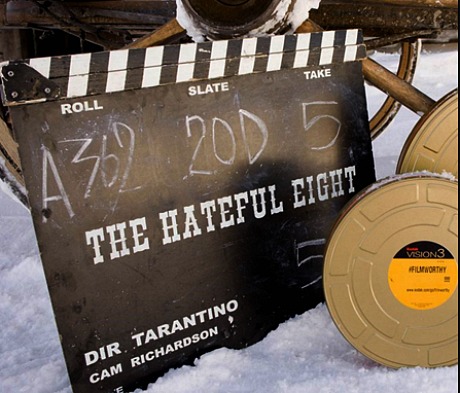 Nobody loved this idea more than myself. But the 70mm projection I saw earlier this month at the Linwood Dunn didn’t look “wow” or “extra” by any visual standard I’m familiar with. It looked ripe and sharp but I could have been looking at a 35mm presentation — it just didn’t scream “70mm!” On top of which (this had been noted by just about everyone) Robert Richardson‘s cinematography doesn’t pop that much — not with two-thirds of it shot in a shadowy, basketball-court-sized cabin lit by lanterns, a fireplace and occasional windowlight.

Here’s to 70mm cinematography persisting well into the 21st Century and top-notch 70mm projection at least being viewable in select industry venues, but exhibition-wise the Hateful Eight experience has probably done more to kill interest in 70mm than anything else, certainly in terms of Ultra Panavision 70. 70mm was half over before, and now it’s really over for the most part. It’s just not needed. Emmanuel Lubezski‘s wondrous, half-digital capturing of The Revenant is all the proof you need.