In a 12.11 Revenant review, New York‘s David Edelstein has written that I was “justly ridiculed” for writing that Alejandro G. Inarritu‘s film was too “unflinchingly brutal” for women. I didn’t actually write that. Having witnessed a female dp friend go into a fetal-tuck position in her seat and hearing from a journalist friend that his wife “wouldn’t last five minutes with this thing,” I half-assedly tweeted “forget women seeing this.” Three hours later I allowed that if “I had given the matter 15 or 20 seconds worth of thought I would have rephrased and qualified in some way. I’m not stupid, and I know that generalizations always get you into trouble.” What I wrote, in fact, was that The Revenant is “an unflinchingly brutal, you-are-there, cold-wind, raw-element immersion like something you’ve never seen…rapturous, fierce, delirious…submerged in ice, arctic air, brutality…an ordeal of blood, agony, survival, snow, ice water, wounds and steaming horse guts.” 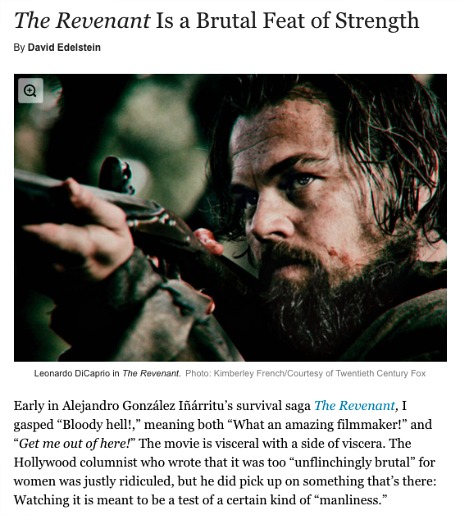 December 11, 2015by Jeffrey Wells15 Comments
« Previous post
When You Dance I Can Really Love
Next post »
Hitting NYC Next Week, Probably Won’t Visit Times Square But…