A Short Force Awakens Review Will Have To Do

I never got around earlier today to rough-drafting a review of Star Wars: The Force Awakens. I was writing and doing other important stuff, and then I saw SW:TFA a second time tonight on the Disney lot. And now it’s almost midnight and I feel too shagged and fagged to bang out ten paragraphs. I conveyed my enthusiasm about it earlier today, mainly with that sentence about how “pic whooshes and soars and skims along in a super-efficient and ‘fan-friendly’ way — you’d have to be some kind of committed shithead to put it down with any conviction.” As far as mainstream opinions go, I’m just like him and the same as you. I’m certainly not in the mood to piss on this film at all, mainly and entirely because there’s no reason to. It is what it is, and that’s perfectly fine. 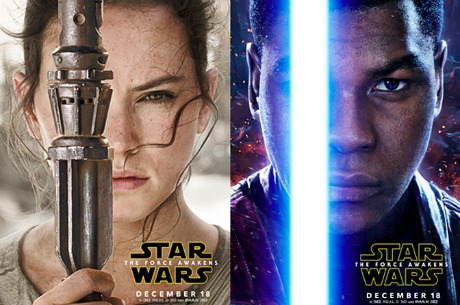 The only beef I have is that The Force Awakens is more of a tribute reel or a greatest hits compilation of A New Hope than anything else. It skims and samples from Episode IV rather than picks up a shovel and digs into fresh soil for an original song of its own. And yet SW:TFA is really quite wonderfully assembled — I marvelled tonight at how every line, shot and scene fits together just so, and I was grinning again at the velocity of it all. I chuckled tonight at the same jokes and at a couple of new ones I missed the first time. It was all good, all pleasurable.

And I felt…well, I have to be honest and say that aside from a mild, cruise-control sense of diversion and wonder from time to time, I didn’t really feel a great deal as I watched this puppy. Not in the pit of my stomach or my soul, I didn’t. Because SW: TFA never tries to draw water from the deep well. I guess it’s a sign of the 4G times we live in that SW:TFA has no sequences in a meditative hanging-with-Yoda-on-planet-Dagobah vein. It’s in too much of a hurry for that kind of thing, and too eager to please those 16-and-unders who would probably feel a little bored by ominous forecasts about fate and spirit. This is an ADD Star Wars movie, but as good as this kind of thing gets.

The way it accelerates and pushes and tries like hell to ring the fan bell over and over and over is certainly commendable from a devotional point of view. J.J. Abrams really wants to turn people on with this thing, turn them on and make ’em smile, and the evidence that he’s succeeded is, I think, overwhelming at this point. There are hundreds of different ways this could have been less expert or audience-pleasing, and it dodges every one of them.

I’m still particularly pleased with the intensity of Daisy Ridley‘s performance as Rey (although an actress I saw it with felt that she was just sufficient) and John Boyega‘s Finn, and I loved Harrison Ford‘s hangdog, frequently amusing, easy-does-it and yet occasionally solemn performance. And Oscar Isaac‘s game determination to submit to the bright-eyed scheme of things. I felt simultaneously intrigued by and yet distanced from Adam Driver‘s baddy-waddy, partly because of his eye makeup and partly because he’s underserved, I feel, with too little dialogue and not quite enough backstory. But let’s not get too crabby. This is a really fun movie. Leave well enough alone.