The Weinstein Company announced today that Quentin Tarantino‘s The Hateful Eight will have a one-week 70mm roadshow booking in 100 theatres between 12.25 and 12.31, and after that things’ll go digital. A release stated that “starting today, moviegoers can purchase tickets for the 70mm roadshow showings at tickets.thehatefuleight.com” — cool. But let’s be upfront. The consensus among journalists who’ve seen the Tarantino film in Ultra Panavision 70 along with its digitally shot, snow-covered western competitor, Alejandro G. Inarritu‘s The Revenant, which also opens on Christmas day, is as follows: (1) Everyone loves QT’s revival of 70mm along with an overture and an intermission and the whole roadshow experience, but (2) Emmanuel Lubezski‘s Alexa 65 photography of The Revenant is more of a knockout than Robert Richardson‘s Super 70 celluloid lensing of The Hateful Eight, if for no other reason than the fact that almost three-quarters of Tarantino’s film is shot inside a large but shadowy one-room cabin (i.e., Minnie’s haberdashery) while Inarritu’s was shot almost almost entirely outdoors, and with a camera (Alexa 65) that is extremely light sensitive. The Inarritu/Lubezki drinks in a lot more snowy footage, and delivers colors and light-levels that are much more exacting and yet subtle. 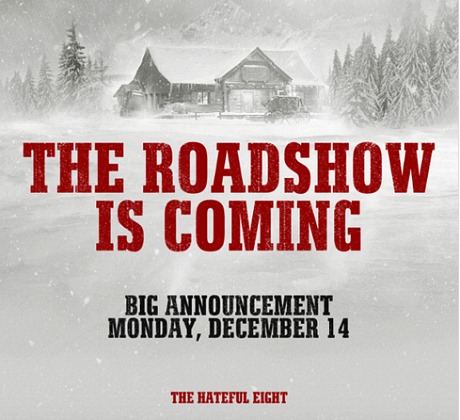