Originally posted on 8.31.15: In a Cowboys & Indians piece called “Quentin Tarantino: Rebel Filmmaker?”, Variety critic Joe Leydon has noted several similarities between the basic plot bones of Tarantino’s The Hateful Eight (Weinstein Co., 12.25) and an episode from the Nick Adams western series The Rebel (’59 to ’61) called “Fair Game.” The episode, written by Richard Newman, premiered on 3.27.60 as one of 33 Rebel episodes directed by Irvin (The Empire Strikes Back) Kershner.

I’ve read a draft of the Hateful Eight script and to go by Leydon’s synopsis of “Fair Game”, there are quite a few plot points shared by the two. 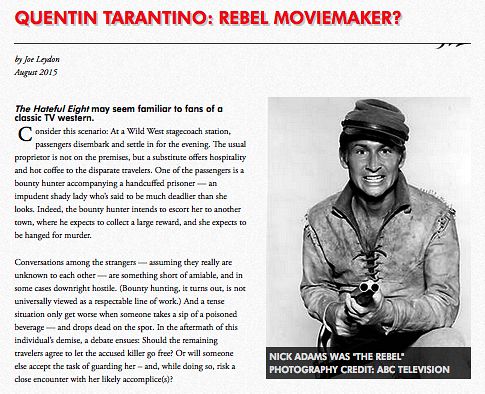