After almost certainly getting urgent phone calls from publicists involved with her Best Actress campaign, 45 Years star Charlotte Rampling has stated that her recent comment about calls for Oscar diversity being “racist against whites” was a misquote of some kind. She told CBS Sunday Morning that her comments “could have been misinterpreted,” and that she “simply meant to say that in an ideal world every performance will be given equal opportunities for consideration. I am very honored to be included in this year’s wonderful group of nominated actors and actresses.” Rampling added that she’s “highly encouraged” by today’s announcement that the Academy will take drastic steps to double its numbers of women and minorities by 2020. “Diversity in our industry is an important issue that needs to be addressed,” she said. 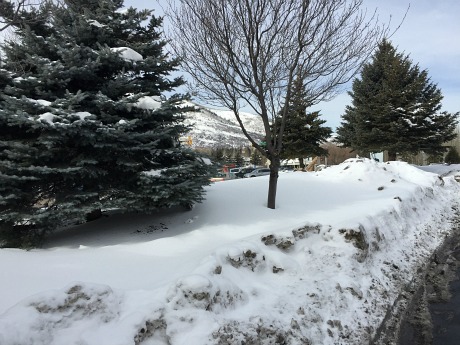 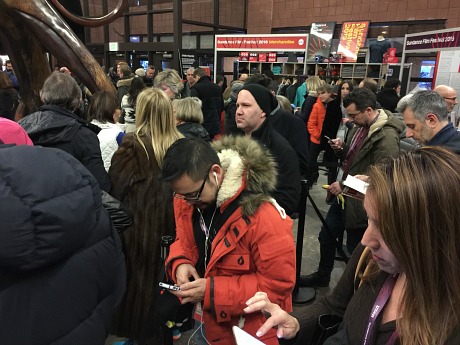 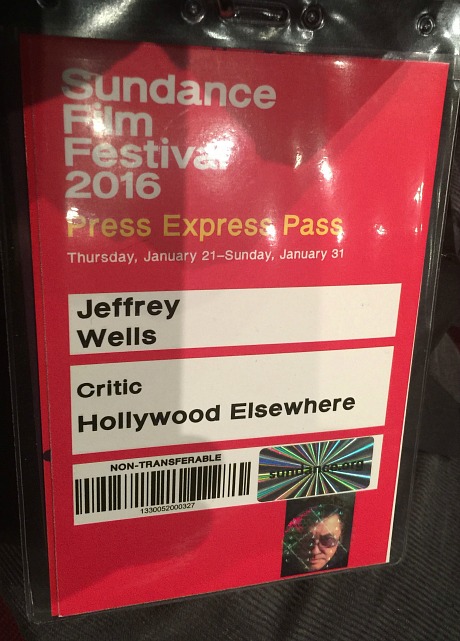 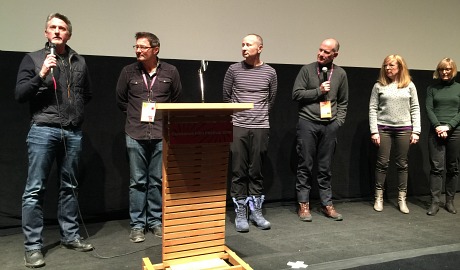 Todd Solondz‘s Weiner-Dog, a morose and depressive slog about a dachsund passing from owner to owner and bearing the sins of mankind, screened at the Eccles tonight. It’s about futility, fuck it, banality, depression, ennui, emptiness, death, Down Syndrome and cancer. It’s definitely not about “what if?” Solondz reportedly told an interviewer today that he intended a blend of Au Hasard Balthasar and Benji. I’ve always hated Solondz and his dweeby, depressive attitude and particularly his attachment to depressive losers. I began hating this film early on, and it was agony sitting through to the end (which I was determined to do no matter what). Animal lovers…I was about to post a warning but they can fend for themselves. As Weiner-Dog began a woman sitting behind me was making that “awwuhhah” sound as the camera regarded the lovable dachshund, and I was muttering to myself or more precisely to God “please don’t make me listen to this woman make ‘awwuhhah’ sounds all through this thing.” Well, she stopped. (On this note Solondz was my ally.) At the very end an older woman sitting next to me was moaning “Why did he do that? Why did he do that?” 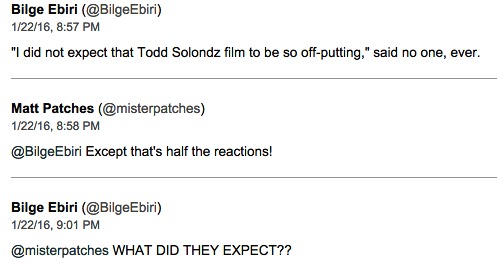 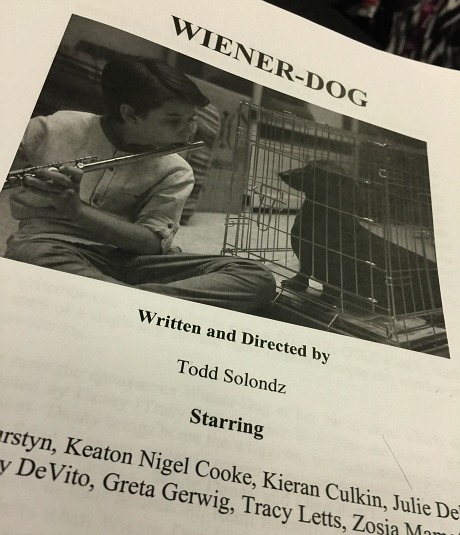 Hollywood Elsewhere and The Hollywood Reporter‘s Scott Feinberg have been suggesting for quite a while that one way to reduce the Academy deadwood factor would be to weight the ballots of those who are working currently or have worked within the last 10 years vs. those who haven’t worked for the last 10 or 20 years and are more or less coasting.

In response to the current OscarsSoWhite narrative, which indirectly suggests that old Academy farts aren’t voting for African-American actors and filmmakers as much as they could or perhaps should, the following letter was sent today to Academy members at 12:26 pm from Academy president Cheryl Boone Isaacs:

“I realize the last few days have been tough for all of us, with so many voices in the mix.

“Last night, the Board of Governors made a series of courageous steps.

“Beginning later this year, each new member’s voting status will last ten years, and will be renewed if that new member has been active in motion pictures during that decade. In addition, members will receive lifetime voting rights after three ten-year terms; or if they have won or been nominated for an Academy Award. We will apply these same standards retroactively to current members.

“In other words, if a current member has not been active in the last 10 years they can still qualify by meeting the other criteria. Those who do not qualify for active status will be moved to emeritus status. Emeritus members do not pay dues but enjoy all the privileges of membership, except voting.

Charlotte Rampling is a woman of cast-iron balls. Instead of going along with the OscarsSoWhite narrative like every other liberal scared rabbit in Hollywood, she said in a 1.22 Europe 1 interview that “perhaps the black actors did not deserve to make the final list” — which is more or less what I said in that Rory Carroll Guardian piece that popped last Wednesday. 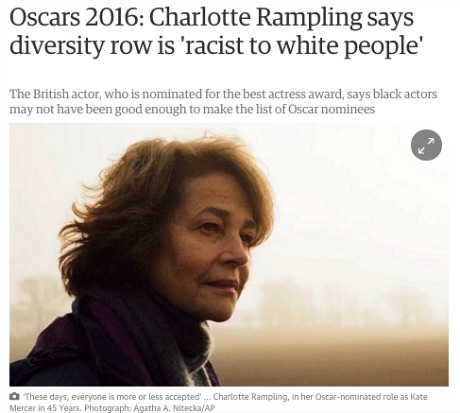 Rampling went further by saying that complaints about the lack of diversity among this year’s Oscar nominees are “racist to whites.” She added: “Why classify people? These days everyone is more or less accepted. Do we have to take from this that there should be lots of minorities everywhere?”

You know what the reaction is going to be? Not that Rampling had the balls to speak her own mind, but that she’s hurt her chances of winning the Best Actress Oscar for her performance in 45 Years.

Repeating from Carroll/Guardian piece: “Jeffrey Wells, a veteran Los Angeles-based film blogger, said others shared his view that the NWA biopic Straight Outta Compton and Michael B. Jordan’s’ performance in Creed, for instance, were not Oscar-worthy but that few would say so publicly.

Tribute documentaries about famous folk tend to be fairly similar, especially if the subjects are still living. They mainly say that the celebrity is a pretty darn wonderful person — modest but brilliant, witty, accomplished as all get out, fascinating, rich, extremely compassionate, loves his/her life, good with kids, pets dogs. Rachel Grady and Heidi Ewing‘s Norman Lear: Just Another Version Of You, which will air as a PBS American Masters special later this year, pretty much sticks to this formula. 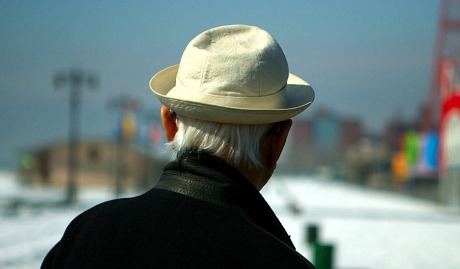 I could call it a cut or two above the usual, certainly from a technical standpoint, but Lear, the 93 year-old creator-writer-producer of such legendary ’70s TV series All In the Family, Maude, Sanford and Son, One Day at a Time and The Jeffersons, is never presented as anything but the most happy and wonderful fella. Which he may well be for the most part, but c’mon — everyone has known hurt, failure, shame, regrets. Everyone has aspects of their nature they wish they could iron out or refine. Everyone experiences nightmare flashes from time to time. Including the very wealthiest.

The doc gets into Lear’s feelings about his father but not all that deeply. Grady and Ewing never elicit a single semi-critical remark about Lear from the famous talking heads (Rob Reiner, George Clooney, et, al.). It was obvious during the post-screening q & a that Lear can be a snappy dictatorial type who knows how to crack a whip, but there wasn’t a hint of this in the doc.

I was bothered by several omissions that I learned about later when I visited Lear’s Wikipedia page.

Chris Kelly‘s Other People, the first narrative drama screened at the 2016 Sundance Film Festival, struck me as deftly written and persuasively well-acted but fraught with self-pity and a little too glum. Wading through and meditating upon cancer death will have that affect. But it’s delicate and restrained and absorbing as far as it goes. And occasionally amusing. But…I don’t know what else to say. I felt a certain respect more than affection. 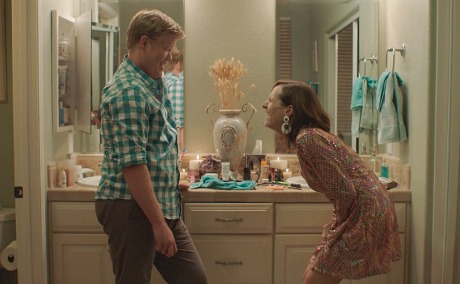 Some in the Eccles audience were reportedly choking up; not this horse. After the show I spoke to two or three guys (i.e., writers) who were partly critical; one was outright dismissive. I later saw on Twitter that others (but not all) were putting it down.

Relatively few will pay to see this in theatres but it’s really not half bad, especially in terms of the acting. I never pulled back or disconnected; I always felt engaged. There’s already a consensus that Molly Shannon, who plays a spirited suburban mom dying of leiomyosarcoma, will be Best Actress-nominated for a Spirit or a Gotham Award. And that the low-key, somewhat pudgy, ginger-haired Jesse Plemons scores also as her son, a gay showbiz writer grappling with more than just the immediate tragedy at hand.

Kelly’s loosely autobiographical film is about Plemons, a 29 year-old showbiz writer who returns home to drab Sacramento to hang with his cancer-stricken mom (Shannon) as she withers away under the care of Plemons’ under-written homophobic dad (Bradley Whitford) while his two younger sisters (Maude Apatow, Madisen Beaty) watch and fret.

The insular Sundance grind distracts from the day-to-day so you miss stuff that everyone else absorbed hours ago, but this an expertly conceived and assembled political ad. There’s a certain poignancy in the fact that Bernie Sanders and Paul Simon are the same age.

The wifi is mostly awful at the Park Regency. Okay, sometimes it’s tolerable but mostly the signal is so weak you have to work in the main lobby, and even from the lobby it stinks. (It crapped out twice when I was filing there yesterday morning.) But the password-free wifi inside the nearby Park City Marriott (a two-minute walk from the Regency) is totally fine so the hell with it — here’s where I work from here on. Warm and friendly with a bus stop right outside the hotel. The only bothersome aspect is the occasional yappity-yap-yapping of the hotel guests and visitors. You’d think they’d want to dial it down like, you know, the members of an old world’s gentleman’s club in London. Note: Video captured today (Friday, 1.22) at 6:25 am.