Has there been a foreign-language film more praised by American critics and industry groups than Laszlo Nemes‘ Son of Saul? 11 critics groups have honored this narrowly focused but hugely unsettling Holocaust flick as 2016’s finest foreign language entry, and general expectations are that more honors are likely. It has a 93% and 89% rating from Rotten Tomatoes and Metacritic, respectively. On 12.18 The Guardian‘s Andrew Pulver asserted that Saul was the flat-out best of the year. Before I saw it last May in Cannes my attitude was “another one?” But Saul flattened me. It’s a mind-blower, a groundbreaker. Everyone recognizes this. 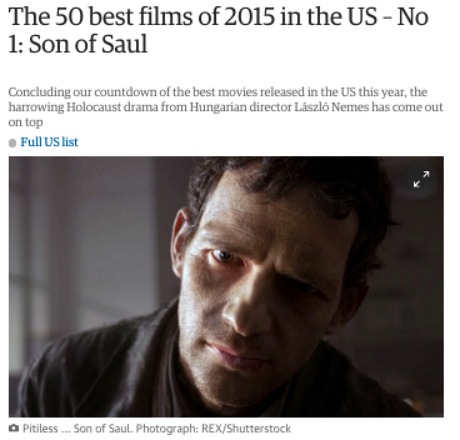 Two well-placed sources — Johnson along with Sony Pictures Classic co-president Tom Bernard — have cast doubt upon this story. Bernard, whose company is distributing Son of Saul, offered a four-word reply: “Don’t fall for rumors.” Johnson, who is obliged to respect the confidentiality of the process, says the following: “I guarantee you nobody actually knows which ones we added. I’ve heard all kinds of speculation. Trust me, nobody knows, and I would be very suspicious of whoever was talking to you last night.”

Johnson would only confirm that, per custom, three 2015 foreign language films were added by the executive committee to the short list of 6.

Johnson emphasizes that the general committee, of which he is also a member in addition to his executive committee duties, “saw 80 movies this year in a period of just over two months,” and that “we finished our screenings in mid-December.”

Johnson adds that the Phase II Committee of 40 members — ten in London, ten in New York, and twenty in Los Angeles — will meet this weekend to view all nine films in screening rooms. “Nobody can vote on this committee if they haven’t seen all nine of the films projected on a big screen,” he states. “I am extremely proud of the make up of our Phase II given that the members are all prominent members of virtually all of the branches of the Academy.”

The final Best Foreign Language nominations will be announced on Thursday, 1.14 along with all of the other Academy nominee selections.

The executive committee was created seven years ago in response to the general committee having declined to include Cristian Mungiu‘s acclaimed 4 Months, 3 Weeks, 2 Days on the 2007 foreign film shortlist. People hit the ceiling when that happened. The cry heard among cognoscenti in New York and Los Angeles was “What’s wrong with those idiots? Something has to be done.”

I don’t know if the rumor about Saul needing to be “saved” is true or not, but I wasn’t entirely surprised when I heard it. Some of the fuddy-duds who populate the general committee probably had a tough time with Saul. It’s not an “easy” sit for anyone, but particularly, one presumes, for Jews with any sort of familial connection with family members (parents, grandparents) who suffered through the Holocaust or who knew anyone who experienced it first-hand, God forbid.

Will the Phase II committee dare to not nominate Son of Saul? It seems unthinkable, but never underestimate the Academy.

The talk, by the way, is that the pony that “they” really like is Deniz Gamze Ergüven‘s Mustang, a far less troubling film than Son of Saul. Set in a remote Turkish village, Mustang depicts the lives of five orphaned sisters and the repressive measures they face growing up under the yoke of stern guardians.